Property Owners to Christian Hate-Pastor: If You Break Your Lease Early, We’ll Waive the Penalty

Last week, Pastor Roger Jimenez of Verity Baptist Church in Sacramento, California made news after saying in a sermon that he was sad that the Orlando nightclub shooter didn’t “finish the job,” that the real tragedy was that “more of them didn’t die,” and that the government should really be executing gay people via firing squad.

After a protest of his church over the weekend, one of the organizers, Beverly Kearney, contacted the company that leases out the space to Jimenez — I assume to find out what they think of his hate speech.

Harsch Investment Properties sent back this letter explaining that they’re legally bound to let Jimenez rent the space until his lease expires next March, but they are willing to waive any penalty if he breaks the contract early — a sign that even they want him to get the hell out of there. 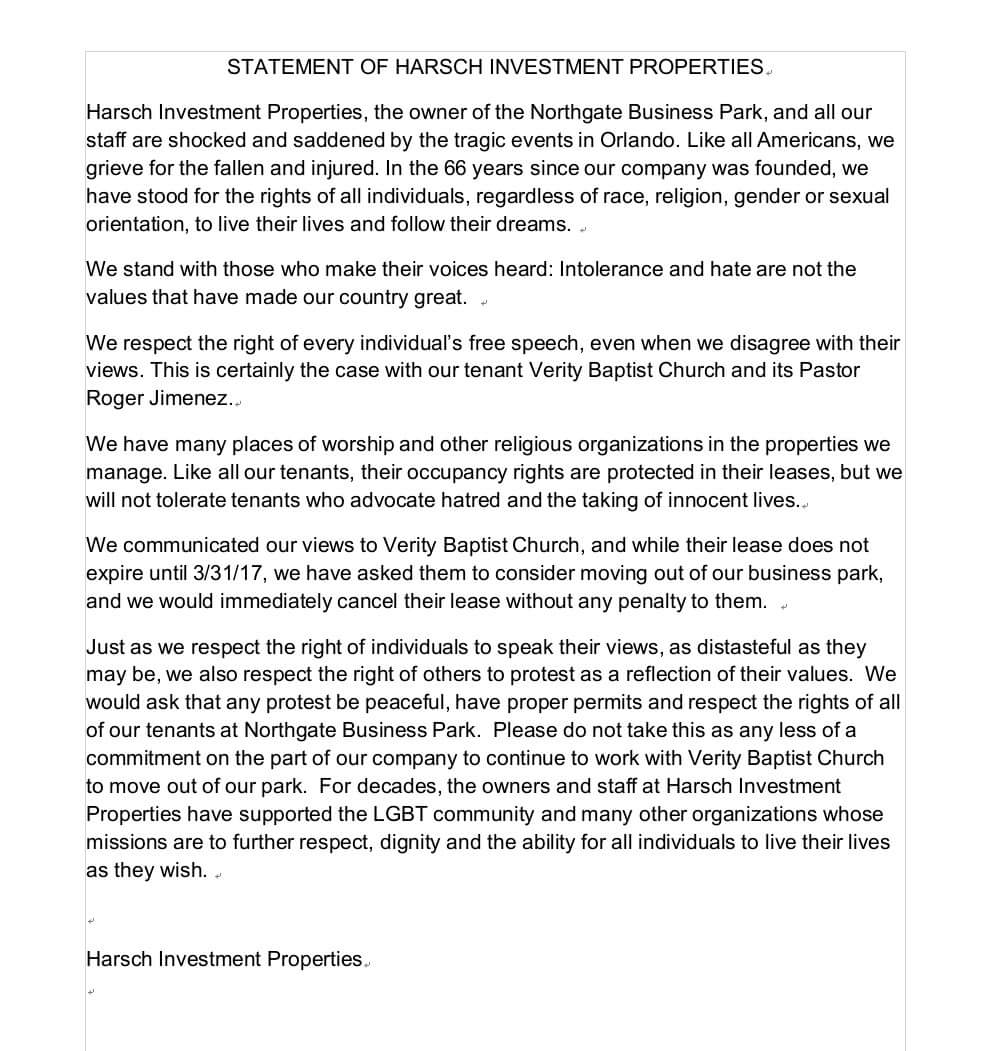 We respect the right of every individual’s free speech, even when we disagree with their views. This is certainly the case with our tenant Verity Baptist Church and its Pastor Roger Jimenez.

We have many places of worship and other religious organizations in the properties we manage. Like all our tenants, their occupancy rights are protected in their leases, but we will not tolerate tenants who advocate hatred and the taking of innocent lives.

We communicated our views to Verity Baptist Church, and while their lease does not expire until 3/31/17, we have asked them to consider moving out of our business park, and we would immediately cancel their lease without any penalty to them.

… For decades, the owners and staff at Harsch Investment Properties have supported the LGBT community and many other organizations whose missions are to further respect, dignity and the ability for all individuals to live their lives as they wish.

(I realize that doesn’t seem like an official letter, and I’ve asked Harsch Investment Properties to confirm it for me, but one local news agency is running with it, so I’ll take my cue from them. ***Update***: Harsch has confirmed that the letter is accurate.)

It’s a fantastic gesture on the company’s part. Will Verity Baptist Church take them up on the offer? I asked them for a response last night and will update this post if/when I hear back.

(Thanks to Joyce for the link)