A church in Gwinnett County, Georgia had a sign outside its building vandalized yesterday, but the more controversial part of the story may be what it said in the first place: 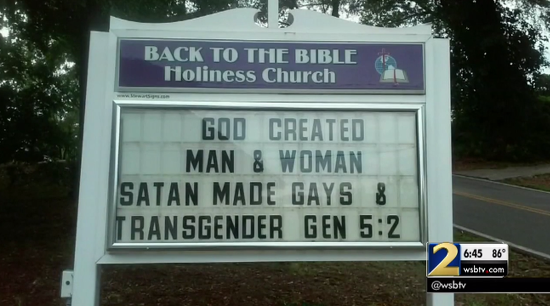 … [Pastor Bobby Wright] of Back to the Bible Holiness Church said he did not think the sign was offensive.

That message itself is a contradiction: If God created men and women, then gay and transgender individuals fit inside those categories. They’re not some inhuman demonic breed of people no matter what Jesus wants Wright to believe. But I’m guessing logical and grammatical accuracy aren’t priorities for this church.

That’s not to excuse the vandalism. They have a right to be bigots. Vandalizing a sign like this only gives them more reason to feel like victims instead of the bullies they are.

Wright said this isn’t the first time he’s put up a sign like this, as if people accepted his hate just because they didn’t react before. He even gave pictures to one reporter almost as a badge of honor: 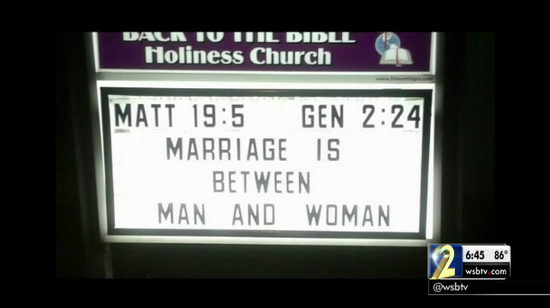 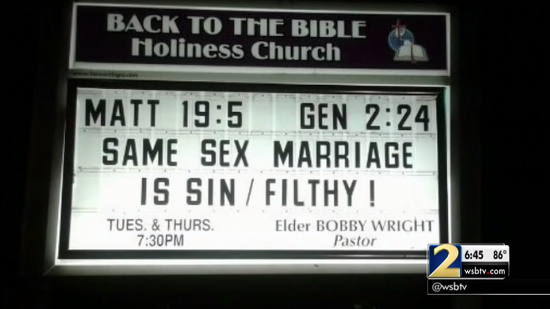 Wright said he’ll be cleaning up the black paint and putting the nasty message back up soon.

(Thanks to Scott for the link. Screenshots via WSB-TV)

June 21, 2016
Tony Perkins: Donald Trump Isn't "Hostile" to Christianity (Unlike the Christian President, Who Is)
Next Post

June 21, 2016 Donald Trump Delegate Encourages Harassment of Church That Wished Muslims a "Blessed Ramadan"
Browse Our Archives
What Are Your Thoughts?leave a comment