During his closed-door meeting with evangelical leaders today, Donald Trump once again showed that he views religion as nothing more than a tool to get ahead. You may agree with that assessment, but you would think the Christian leaders he met with would want a candidate who takes their faith more seriously. Instead, they heard a typical Trump speech, full of false accusations, promises he can’t possibly fulfill, and a problematic reference to Scripture.

According to video taken by E.W. Jackson, Trump claimed Hillary Clinton‘s religion was a big mystery, suggesting it was dangerous to put her in office because we don’t know what we’re going to get.

Of course, her faith is a mystery only if, like Trump, the only person you ever think about is yourself. 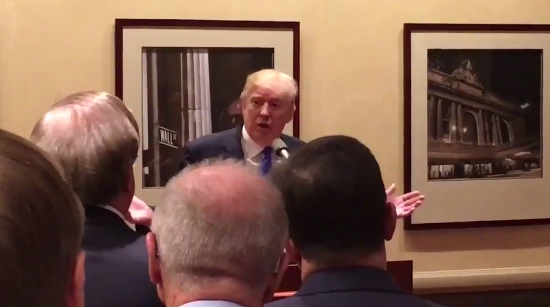 Our leaders are "selling Christianity down the tubes" #ConversationWithTrump pic.twitter.com/55PBY26aAv

Trump doesn’t do any research before talking, so let me help him out.

Clinton is a Methodist. She was raised in the religion. She taught Sunday school in a Methodist church. She attends the Foundry United Methodist Church. She frequently brings up her faith in speeches.

What Trump doesn’t understand is that Clinton has respect for church/state separation. She doesn’t beat you over the head with her faith because she realizes she’s representing people who don’t necessarily believe as she does. Unlike the evangelical leaders in that room, Clinton isn’t interested in using the government to promote her personal faith, even if she makes passing references to God in her speeches.

You know, oftentimes in some of my rallies… and I say — in a joking fashion, but boy, do I mean it — we’re going to be saying “Merry Christmas’ again”… I mean, you go to Macy’s, you go to these department stores today, you don’t see any Christmas signs.

I’ve never seen a department store that didn’t acknowledge Christmas. They might not have a Nativity scene around every corner, but they all recognize the holiday.

Trump also referenced a Bible verse, 1 Timothy 2 — not by name, since that would’ve been a disaster — which calls for people to pray for “all those in authority.” He interpreted that, however, as calling on everyone to vote for him:

Our leaders are "selling Christianity down the tubes" #ConversationWithTrump pic.twitter.com/55PBY26aAv

You can pray for your leaders and I agree with that — pray for everyone — but what you really have to do is you have to pray to get everybody out to vote for one specific person. And we can’t be, again, politically correct and say we pray for all of our leaders, because all of your leaders are selling Christianity down the tubes, selling the evangelicals down the tubes. And it’s a very, very bad thing that’s happening.

Whether that bit of loose, misguided interpretation will hurt him remains to be seen. (Spoiler: It won’t.)

Interestingly enough, Trump must not have realized that same Bible chapter (1 Timothy 2) contains one of the most sexist verses in the whole book: “I do not permit a woman to teach or to assume authority over a man; she must be quiet.”

Huh. Given the way he treats women, maybe Trump reads the Bible after all.

June 21, 2016
Tennessee Clinic Wants You to Forget That Their Doctors Believe Vaccines “Can Cause Autism”
Next Post