CNN’s Carol Costello recently visited Creationist Ken Ham‘s soon-to-open Noah’s Ark theme park in Kentucky. While she marvels at the “mind-blowing” size and scope of Ark Encounter, she makes very clear that she’s bothered by the fact that the $100 million project is partially funded by taxpayers, despite being a religious ministry. She’s also troubled by the Statement of Faith that employees are forced to sign.

It’s the same stuff we’ve been writing about for months now. 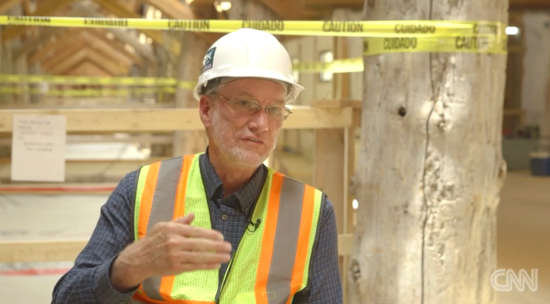 Yes, tax incentives and free land provided by the state of Kentucky and Grant County to operate Ham’s “evangelical tool,” all in exchange for the hope that the Ark will attract millions of tourism dollars and jobs to the state.

Ham says the tax incentive is purely for performance — based on how many people visit the park — but make no mistake: This is a government-sponsored Christian ministry. They very likely couldn’t have built the Ark without the promise of that tax break.

Costello also points out the narrowness of the Statement of Faith:

Ham insists the Statement of Faith is a “basic” Christian statement of faith, sort of like you would find in a local church or Baptist Church.

But it’s way more than that. Ham’s Statement of Faith requires employees to disavow homosexuality, same-sex marriage and pre-marital sex. Employees must also believe in a literal interpretation of Genesis and Jesus Christ. So, no Jewish or Muslim employees. I would be ineligible, too. Catholics embrace evolutionary science.

As another pastor quoted in the piece points out, if Muslims had government support to promote their faith and insisted that employees of a for-profit business held the same specific beliefs as them, we’d equate it to Sharia Law.

But because this is Christianity, it gets a free pass.

This isn’t new information. Critics have been pointing it out for a long time, but Governor Matt Bevin and other state officials have simply ignored it. If they can hand conservative Christians an $18 million gift, they’re happy to do it, even if it means becoming a beacon of miseducation and scientific illiteracy.

Honestly, I don’t even know why Ham is wearing a hard hat in that screenshot above since there’s very little in there to protect.

(Thanks to Zack for the link)