These Jehovah’s Witnesses Propaganda Films Urge You to Be Faithful, Despite Common Sense June 20, 2016 Hemant Mehta

These Jehovah’s Witnesses Propaganda Films Urge You to Be Faithful, Despite Common Sense

In his latest video picking apart the messages coming out of this summer’s Jehovah’s Witnesses regional conferences, Lloyd Evans explains and analyzes the Job and Hezekiah propaganda films. (There’s a corresponding article right here written by John Redwood, the pen name for an undercover JW.)

The first film is all about a man named Ethan who, like the biblical Job, suffers disaster after disaster. His dad dies, his younger son dies, he is forced to quit work, he’s diagnosed with cancer, nothing seems to go his way… but he remains faithful to Jehovah. 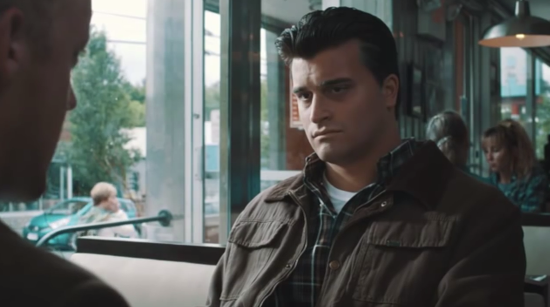 John Redwood says that, while the film appears to end on a happy ending, it’s important to talk about what the sequel to the film would look like:

While the implication is that reliance and loyalty to God lead to favorable outcomes, the hard truth of life is that the unfavorable outcomes will always follow, and we are left with the same questions we started out with, and the same problems. Maybe worse. We could write our own extension of this drama: Ethan’s cancer is in remission, but it will return. His son Rowan will be plagued by “impure” thoughts, and be disfellowshipped when he has sex with a non-Witness girl from school. [New wife] Sasha will have a subsequent mental breakdown, and will be treated with anti-depressants. Ethan’s brother Bill will not respond to the invitation to attend Witness meetings, and they almost never see each other. The family is torn apart. The organization offers little comfort, despite producing a motivational video about the modern day equivalent of Job. And we are right back to where we started.

The other film discussed here is “a reenactment of the Assyrian siege of Jerusalem during the reign of King Hezekiah.” 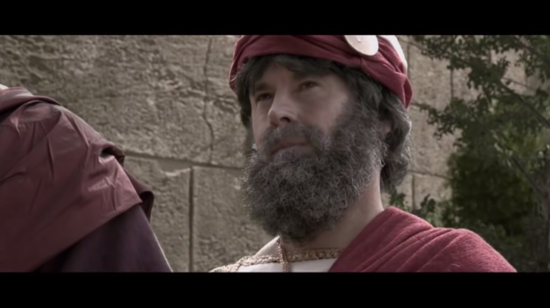 As the Assyrians are attacking, Hezekiah continues to follow the advice of Jehovah instead of making what his allies believe are strategic alliances. When he’s at his lowest point, he agrees to a compromise… which backfires on him (of course). So he comes back to Jehovah and escapes with a victory. 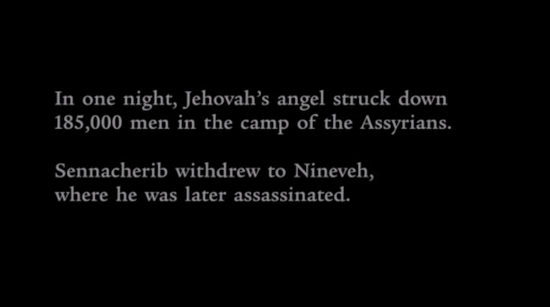 Since Jehovah’s Witnesses are Biblical literalists, the God they worship is guilty of far more genocide than any other God worshiped by the thousands of religions of the world. Perhaps there is a small degree of comfort in the knowledge that no archaeologist has ever uncovered a shred of evidence supporting the mass killing of 185,000 soldiers outside the walls of Jerusalem.

For Witnesses, separation from the world is imperative. They often refer to the barrier between the outside world and their religion as a fence; a fence which should never be straddled. The Hezekiah story reinforces the Witness belief that it’s “us against the world” — and that we need to stay safe inside the walls of metaphorical Jerusalem, pray to God, and wait for salvation to come.

Both films are incredible pieces of propaganda. They remind you to be loyal and faithful even in the face of common sense and death. It’s just vile stuff.

This is part 4 of 6 of Evans’ recaps of these conference videos.

June 20, 2016 Every New Copy of Richard Dawkins' The Blind Watchmaker Will Have a Unique Cover
Browse Our Archives
What Are Your Thoughts?leave a comment