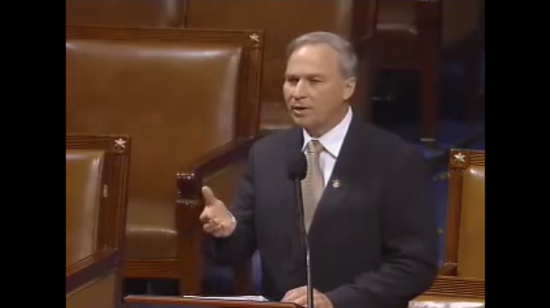 However, he’s not done tearing down the wall of separation yet. In an essay published in the Suffolk News-Herald, Forbes laments the idea that Christians can’t just push their religious views on other people even when they’re working for public schools and the government:

… the Bremerton School District took issue with Coach Kennedy’s actions. They called his actions unlawful under the Establishment Clause of the United States Constitution. They suspended Coach Kennedy and threatened to fire him if he continued to pray before or after the games. And many people were left wondering why Coach Kennedy was being forced to choose between faith and football.

He’s referring to Bremerton High School assistant football coach Joe Kennedy, who was on the clock when he held these public prayers on the football field (inadvertently making the games all about him instead of the kids). Voluntary or not, they sent a signal to his players that Christians would get favorable treatment and more playing time — and anyone who opposed his public display of faith would be punished for it. He may claim otherwise, but his actions were very clear.

Military chaplains often tell me they are concerned that acting consistent with the tenets of their faith — the very nature of their positions — could mean losing their jobs.

What does that even mean? Christian chaplains want to tell gay soldiers they’re going to Hell? They want to tell atheist soldiers to turn to Jesus? If they can’t provide comfort and advice to everyone in the military, then either they should lose their jobs or the military must allow Humanist chaplains (something they’ve rejected time and time again).

Forbes gave another weak example of how rough Christians have it:

The Little Sisters of the Poor, a religious nonprofit organization that cares for the vulnerable elderly poor, faces pressure to violate its faith because the government required certain services in its health insurance plans.

Bullshit. The Catholic non-profit had the option of signing a sheet of paper saying they refused to provide birth control to employees and the government would’ve honored it, but that still wasn’t enough for them. They claimed signing the paper made them complicit in abortions. That’s how much they had to stretch the truth in order to claim the law was against them.

The government today essentially says Americans can believe whatever they want, but people of faith can now be penalized if they exercise those beliefs.

Every American should be free to live and work according to their beliefs without fear of punishment from the government. It is a fundamental human right worth protecting.

No one is preventing Christians from being Christians. There are churches on every block and Christians in every level of the government, all the way up to the Oval Office. No Christian has ever been punished for their beliefs — certainly non-Christians have faced much worse. The only people who get punished are those who believe their Christian faith makes them immune to following the law and who believe it’s their right to use their public positions to promote their religion.

It wouldn’t be okay if atheists did it, and it’s not okay when Christians do it. A better politician would understand that. Randy Forbes has spent his career arguing that Christians deserve special rights and he’s finally getting the kick out the door that he deserves. November can’t come soon enough.