A New Book Explores Why the Author Ran for Office As An Openly Atheist Candidate June 20, 2016 Hemant Mehta

In 2010, after Dr. Wynne LeGrow retired from his career as a physician, he ran for Congress from Virginia’s 4th District, which was represented by Republican Randy Forbes, the man so conservative, he founded the Congressional Prayer Caucus.

LeGrow, on the other hand, ran as an open atheist. He lost the race, but writes about the experience in his new book Last Leper in the Colony. 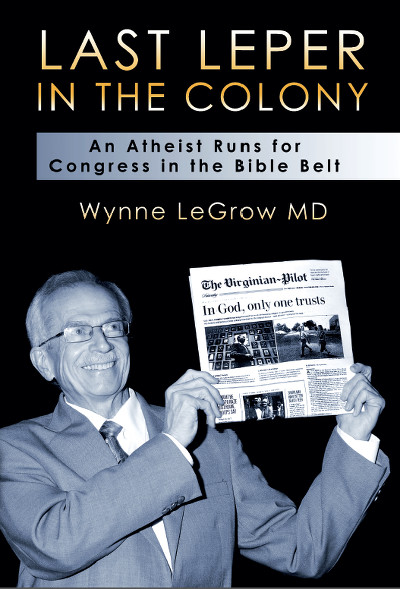 In the excerpt below, LeGrow talks about why he chose to be an openly atheist candidate when there were other safer options available:

There is no way to tell a believer from a nonbeliever by the way he or she acts. No amount of dishonesty, malfeasance, antisocial behavior, racial or homophobic prejudice, misappropriation of funds, substance abuse, sexual indiscretion, or perversion disqualifies one from being considered a true believer. The one transgression that cannot be forgiven is that of thinking for oneself and coming to an unacceptable conclusion concerning the existence of a deity.

Think of the politician you most dislike. He or she probably cultivates the image of a devout follower of the Lord. If you are a nonbeliever and considering running for office, you can go in one of three directions. First, you can try to pass yourself off as a believer, either by directly lying or simply not correcting the assumption that you — like all good people — are a believer. Second, you can say you are a strong believer in the separation of church and state and wish to keep your own views on religion private. Third, you can throw caution to the wind and admit you are an atheist or an agnostic. Welcome to my world.

Before my campaign I had the pleasure of meeting former Congresswoman Pat Schroeder, who ran for president in 1987. While serving in Congress she, on at least one occasion, identified herself to a group of demonstrators as a “secular humanist” but did not go so far as to say she was a nonbeliever. Her advice to me, should I run for office, was that I should simply say I believed in a separation of church and state, and I preferred to keep my personal views to myself. But what fun is that?

I never would have considered running for office if I were pleased with the direction our country was headed or if I felt our congressman was doing a reasonable job. And I could have run for office without ever stirring that pot of religious belief and simply allowed everyone to assume I was a good Christian. Had I done this, I am sure I would have lost, as there would have been little to distinguish me from the many other losing Democratic challengers (and significant number of incumbents) in 2010. Following the campaign there is no doubt that I would have felt a profound emptiness knowing I’d had the nomination of a major political party and had not challenged the religious bigotry that many believers feel toward nonbelievers.

I also had another motivation for running openly as an atheist. Our country, where Christian fundamentalists who deny evolution and global climate change dominate the Republican Party, needed to have a conversation about the worldview of a nonbeliever. What would happen, I wondered, if an ideal presidential candidate came along who was a nonbeliever, and this fact had come out long before he or she had ever run for office? I was hoping my candidacy would put this topic out in the open and allow everyone to comment.

A characteristic of many politicians suggests the desire to be loved by the masses. We have all seen political leaders at large rallies, waving to throngs of adoring admirers, some carrying placards with the candidate’s name or likeness. This need for public adoration — rather than a desire to serve the people — seems to be the impetus for many individuals to get into politics and stay in office. If, however, someone is a nonbeliever and chooses to be open about it, it suggests he does not have the politician’s need for universal adoration and is quite comfortable if a significant number of people think less of him because of his nonbelief. This, in my view, is a good way for a nonbeliever to conduct his life, but in this country and at this time, it is not a good way to get elected to office.

Last Leper in the Colony is now available on Amazon.

June 20, 2016
Another Pastor Celebrates Orlando Massacre, Hoping God Will "Finish the Job" and Kill the Injured
Next Post