Tennessee Pastor: Orlando Shootings Were Just Part of “God’s Wrath” Against “the Gays”

At Beech Cliff Pentecostal Holiness Church in Johnson City, Tennessee, this was the sign Pastor Jesse Price put up this week: 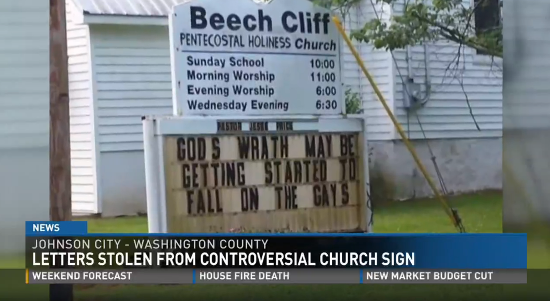 God’s wrath may be getting started to fall on the gays.

So the mass murder of 49 people was just God’s way of saying he hates gay people?

You would think God would have been much angrier after marriage equality became legal nationwide… And since when does he get his wrath via a Muslim mass murderer? If Christian preachers have taught me anything, it’s that God punishes us for our acceptance of homosexuality by sending tornados and hurricanes to cities he doesn’t like.

Someone actually took down the letters from that church sign, though Price says he’ll put the phrase back up. Because how else will gay people know that he loves them?

June 19, 2016
Ken Ham: Evolution Is Way Worse Than the Noah's Ark Story (Despite the Genocide and Incest)
Next Post