Ken Ham: Evolution Is Way Worse Than the Noah’s Ark Story (Despite the Genocide and Incest) June 19, 2016 Hemant Mehta

Ken Ham: Evolution Is Way Worse Than the Noah’s Ark Story (Despite the Genocide and Incest)

Here’s a typical Ken Ham tweet for you: Atheists accuse me of THIS, but they believe in [INSERT LIE HERE]!

But I think he gave up on this one halfway through: 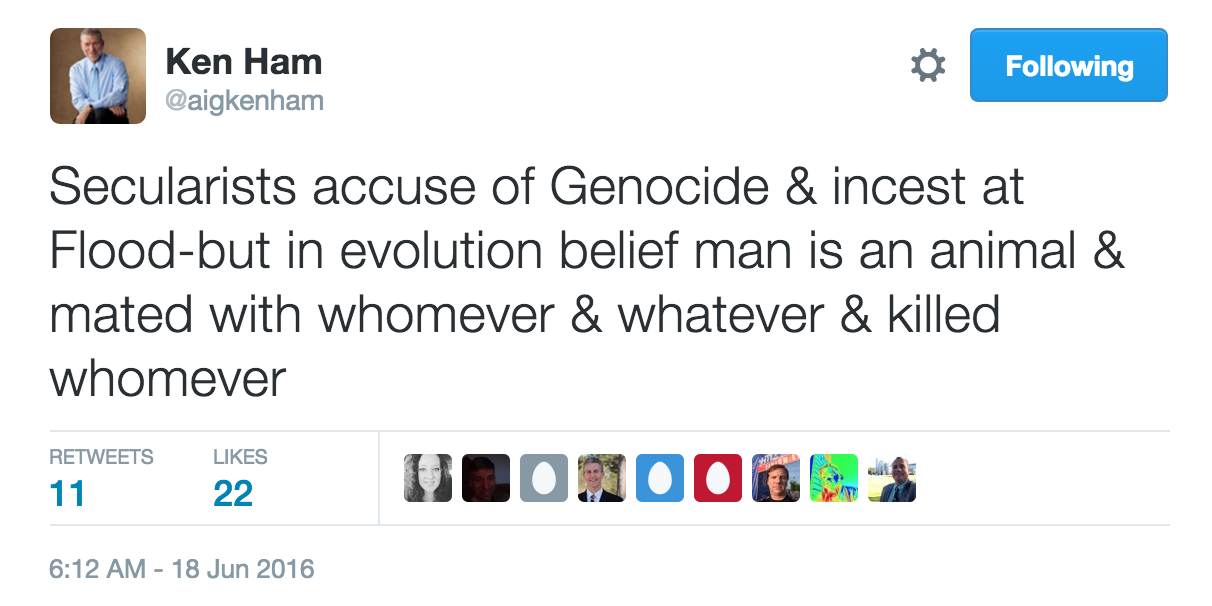 It’s true that atheists claim the Noah’s Ark story is about genocide. That’s because it is. God kills nearly every species on the planet, save a few select animals and Noah’s family. And we absolutely mention incest since, well, everyone outside of Noah’s family is killed and I can’t think of any other way to repopulate the planet.

But evolution is worse, Ham says, because “man is an animal & mated with whomever & whatever & killed whomever.”

I don’t even know what that’s supposed to mean. Maybe his “research team” quit in the middle of the tweet. Is Ham saying humans mate with monkeys? We don’t. Is he saying we did? We didn’t. Does he think evolution requires us to act in certain ways? It doesn’t.

Meanwhile, Christians gave this guy upwards of $100 million to “educate” the world.

At least Ham didn’t even bother rebutting the charges of genocide and incest. I guess even he accepts that at this point.

June 19, 2016 Tennessee Pastor: Orlando Shootings Were Just Part of "God's Wrath" Against "the Gays"
Browse Our Archives
What Are Your Thoughts?leave a comment