After Battle With Terminal Illness, “Heaven Over Hospital” Child Dies at Home (As She Requested) June 19, 2016 Hemant Mehta

After Battle With Terminal Illness, “Heaven Over Hospital” Child Dies at Home (As She Requested)

Last October, I posted about how five-year-old Julianna Snow was suffering from spinal muscular atrophy, “a hereditary disease where neurons in the brain and spinal cord are progressively destroyed.” It’s an incurable disease and catching a cold virus could be enough to kill her.

What made the story controversial was that Julianna said that she didn’t want to go back to the hospital if she got sick again. She’d rather stay at home, die, and go to Heaven. 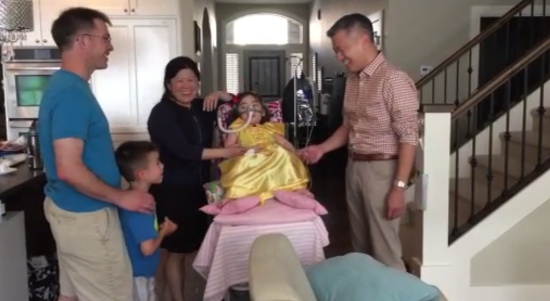 CNN’s Elizabeth Cohen wrote about whether this was a choice a little girl should be allowed to make in a compelling two–part article.

Bioethicist Art Caplan has read [mother] Michelle’s blogs, and he thinks she’s made the wrong decision.

“This doesn’t sit well with me. It makes me nervous,” he says. “I think a 4-year-old might be capable of deciding what music to hear or what picture book they might want to read. But I think there’s zero chance a 4-year-old can understand the concept of death. That kind of thinking doesn’t really develop until around age 9 or 10.”

He says Julianna’s parents shouldn’t put any stock in what she has to say about end-of-life decisions. Maybe she chose heaven over the hospital because she feels how much her parents hate to see her suffer; young children often pick up cues from their parents and want to please them, he says.

“To say her experience is irrelevant doesn’t make any sense,” [pediatrician and ethicist Dr. Chris Feudtner] says. “She knows more than anyone what it’s like to be not a theoretical girl with a progressive neuromuscular disorder, but to be Julianna.”

As I wrote then, this was very different than the typical cases we hear about parents who are willing to sacrifice their children for the sake of religion. In this case, Julianna’s desire to go to Heaven was almost irrelevant. It’s not like her parents were allowing her to die like the children of Christian Scientists. They were trying to do whatever they could to make their daughter happy with the time she had left. Even without religion, the bigger issue here was whether a child should get to decide where to end her life if death was imminent.

I bring this all up because Julianna died this week. And it wasn’t in a hospital.

“We had the full support of hospice and we had the things we needed to keep her comfortable. She died at home, in her princess room and in my arms. I don’t know that she would have wanted it any other way.“

I’ve received several messages from atheists who are appalled at this decision, but let’s be clear about the situation: Going to the hospital, in this particular case, wasn’t going to significantly prolong Julianna’s life. This was a decision about where to end her life, not when and not how.

It’s misleading, albeit catchy, for headlines to say this was about “heaven or hospital.” (After all, Christians still believe people who die in hospitals can go to Heaven.)

The truth is that it was about dying in a bland, impersonal hospital or dying in your home surrounded by everyone and everything you love.

If you believe in death with dignity, it’s all about the comfort of the patients. You want to give them as much control as possible over the ends of their lives. Julianna’s religious parents did absolutely nothing wrong, as far as I can tell, in trying to comfort their dying daughter in the only way they knew how. Don’t make the mistake of criticizing them simply because they’re religious. Their daughter died in a way that gave her a little bit of pleasure amidst a lot of pain. How could you fault anyone for wanting that for her?

You can see some lovely pictures of Julianna and beautiful comments from her mother right here.

(Screenshot via CNN video. Large portions of this article were published earlier)

June 19, 2016
Tennessee Pastor: Orlando Shootings Were Just Part of "God's Wrath" Against "the Gays"
Next Post