Here’s an interesting move: ABC News had scheduled Christian hate group leader Tony Perkins (of the Family Research Council) to appear on today’s episode of This Week, then quietly removed him from the lineup after many people complained.

Whether the removal was the direct result of the complaints hasn’t been confirmed, but given Perkins’ previous statements about LGBT people, it’s difficult to see what he would have contributed to any discussion on the Orlando shootings. 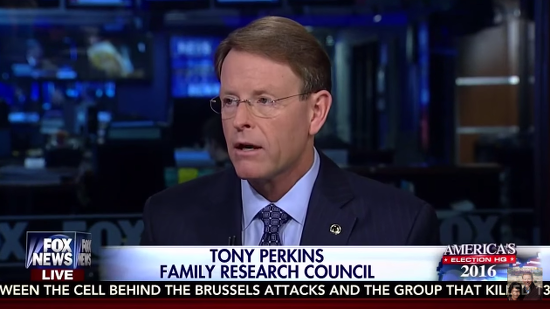 FRC has long been identified by the Southern Poverty Law Center as a prominent anti-LGBT hate-group, and Perkins himself has a notorious reputation for his anti-LGBT vitriol. Though he often tames his rhetoric in mainstream news appearances to sound like his anti-gay views represent all U.S. Christians, he then tells FRC’s audiences things like that homosexuality leads to “eternal damnation” and is “harmful” to individuals “and to society as a whole.”

Writer Laura Bethany Taylor also asked ABC in an open letter, “How tolerant would the national media be of a KKK leader speaking on a massacre of African Americans?”

Whatever the reason, removing Perkins from the lineup was the right move. He’s welcome to spout his hate speech in the name of Christianity, but he shouldn’t have his voice amplified by the mainstream media unless they’re criticizing him for his bigotry. He certainly doesn’t represent the decent Christians out there who don’t spend their time making life worse for LGBT people.

June 19, 2016
The Man Who Allegedly Murdered Atheist Writer Avijit Roy Has Been Shot Dead By Bangladeshi Police
Next Post