Yesterday, a listening event at an independent record store in Istanbul, where Radiohead fans were celebrating the release of the group’s new album, unexpectedly turned violent when outraged religionists showed up. 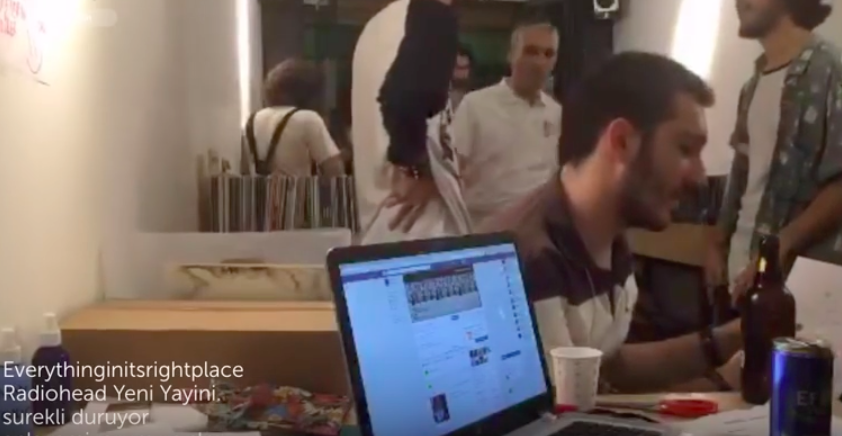 [A] group of men carrying sticks, upset that people were listening to music and consuming alcohol during the holy month of Ramadan, entered the shop and yelled at an employee, Turkey’s Posta reported.

The altercation continued outside as the men and listening party attendees yelled at each other in the street. Eventually, the mob smashed out Velvet IndieGround’s glass door and windows and began physically attacking attendees. Although no one was seriously injured in the incident, one person was bloodied after being hit in the head with a bottle, Velvet IndieGround’s Facebook page alerted its followers.

A group of 20 assailants carrying sticks and bottles entered a record store in central Istanbul on June 17, beating up store owners and Radiohead fans who were at a listening party of the band’s new album, A Moon Shaped Pool.

Radiohead fans at the Velvet IndieGround record store in the Beyoğlu district were listening to music and consuming alcohol when a group of men entered the store and accosted the patrons. …

“Do not you feel ashamed [of drinking alcohol] in Ramadan?” one of the assailants said while also threatening to burn down the store down.

Do you not feel ashamed, sir, for attacking people with sticks, for hitting them with bottles, for destroying things that don’t belong to you, for threatening to commit arson?

Incredible, isn’t it? We are the ones who quietly go about our business, not breaking any laws. They are the ones who violate law and order by making death threats, vandalizing property, and visiting physical brutality on people who did nothing worse than having a beer and listening to music. And yet, somehow, we‘re the immoral ones.

Mark my words: Istanbul today, London and Berlin tomorrow. Before you dismiss that as “Islamophobia,” read this and this.

June 18, 2016
How Many Levels of Protests Will Take Place on Opening Day of the Noah's Ark Theme Park?
Next Post