When they hear the words “Mormon,” “Republican,” and “Utah,” LGBT people have good reason to run the hell away. But in a vigil speech made by Utah’s Mormon Republican Lt. Governor Spencer Cox this week, following the mass shooting in Orlando, he apologized about the way he treated gay people in his past: 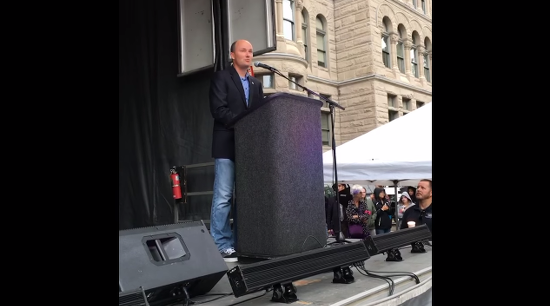 I grew up in a small town and went to a small rural high school. There were some kids in my class that were different. Sometimes I wasn’t kind to them. I didn’t know it at the time, but I know now that they were gay. I will forever regret not treating them with the kindness, dignity and respect — the love — that they deserved. For that, I sincerely and humbly apologize.

I believe that we can all agree we have come a long way as a society when it comes to our acceptance and understanding of the LGBTQ community (did I get that right?). However, there has been something about this tragedy that has very much troubled me. I believe that there is a question, two questions actually, that each of us needs to ask ourselves in our heart of hearts. And I am speaking now to the straight community. How did you feel when you heard that 49 people had been gunned down by a self-proclaimed terrorist? That’s the easy question. Here is the hard one: Did that feeling change when you found out the shooting was at a gay bar at 2 a.m. in the morning? If that feeling changed, then we are doing something wrong.

It’s a good speech. It’s honest and vulnerable and doesn’t appear to be a political ploy or an opportunity to place blame on the “other side.”

Here’s what I’d like to know: What will Cox be doing to help the LGBT community from here on out? Utah has been better than other Republican-led states when it comes to anti-discrimination laws, but it’s not perfect. Will Cox advocate for more pro-equality legislation?

More importantly, will he continue to support the Mormon Church, which has done so much to punish people for their sexual orientation?

A speech is nice. But real actions would be so much more useful.

June 17, 2016
Texas Democrats Will Consider Adopting Resolution to Remove God from the National Motto
Next Post

June 17, 2016 For the First Time, a "Secular Caucus" Will Gather at the Texas Democratic Convention
Browse Our Archives
What Are Your Thoughts?leave a comment