When the Texas Democratic Convention meets this weekend, one of the agenda items will be discussing the various resolutions that have been proposed by local districts in order to add them to the party’s platform.

Many of them aren’t very interesting, but this one stood out from the crowd: 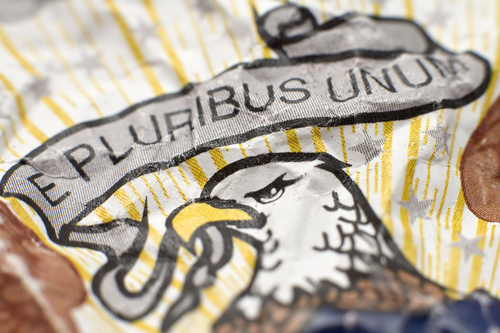 “That ‘E Pluribus Unum’ shall be restored as the official national motto of the United States of America.”

I should mention that the phrasing is slightly off: “E Pluribus Unum” — or “Out of many, one” — was never adopted as the “official” U.S. motto to begin with, so it can’t technically be “restored” as such, but I would certainly welcome the replacement.

Will the resolution pass? I doubt it.

Even if it did, it doesn’t mean Congress would give a damn. I doubt Speaker of the House Paul Ryan will make a push to get rid of “In God We Trust.”

But it’s fun to think about, isn’t it?

(Thanks to Brian for the link. Image via rorem / Shutterstock.com)