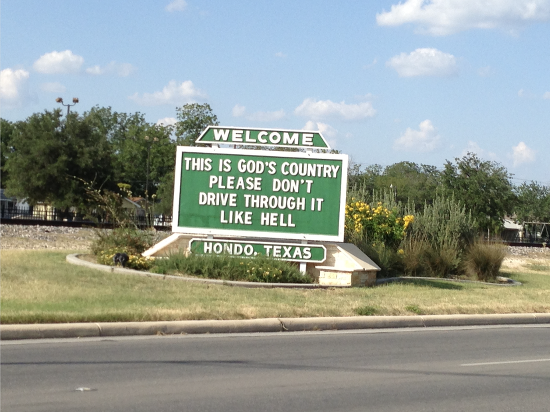 That’s what the Freedom From Religion Foundation wants to know:

“It is inappropriate for the city of Hondo to display religious signs that convey government preference for religion over nonreligion,” FFRF Co-President Annie Laurie Gaylor writes to Hondo Mayor James Danner. “The display of the religious message ‘This Is God’s Country’ on public property violates the Establishment Clause of the First Amendment, which prohibits public bodies from advancing, supporting, or promoting religion. It is also needlessly divisive, since it sends the message that nonbelievers are not welcome in the city.”

FFRF adds that if Hondo really is God’s Country, that may give some people an incentive to drive even faster in order to get out of it. I don’t know if I buy that argument. After all, even if you left Hondo, you’d still be in Texas.

June 17, 2016
That Awkward Moment When Everyone Thinks Your Church Is Led By a Christian Hate-Pastor
Next Post

June 17, 2016 CA School District Owes Atheist Groups $10,000 After Censoring Their Scholarship Offers
Browse Our Archives
What Are Your Thoughts?leave a comment