The three Washington State Supreme Court justices up for re-election this November won’t have a free walk into another term; there will be challengers for all of their seats.

And one of the challengers is a Creationist known for trying to delegitimize evolution in public schools: 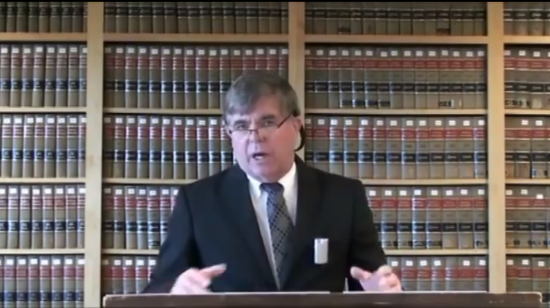 The latest challenger is David DeWolf, a Gonzaga University law professor and senior fellow at the conservative Discovery Institute’s Center for Science and Culture. DeWolf is running against Supreme Court Justice Mary Yu, who last ran unopposed in filling out the term of resigned Justice Jim Johnson.

The Discovery Institute, of course, is the non-profit group that promotes the debunked theory known as Intelligent Design.

DeWolf co-wrote a book all about “Teaching the Origins Controversy” in which he argued that students must be taught his preferred form of Christian mythology because “Without academic freedom, education becomes indoctrination.” The irony was apparently lost on him.

And now he’s a guy who could soon have the power to wield judgment on matters of what’s legal in the state’s public schools. Scary stuff.

June 16, 2016
A Reaction to the Orlando Massacre: Liberal Redneck Edition
Next Post