Pat Robertson: Liberals Love Gays and Islamists; Conservatives Should “Let Them Kill Themselves”

You knew Pat Robertson was going to say something absurd after the mass shooting at a gay nightclub in Orlando and the King of Stupid Statements didn’t let us down. 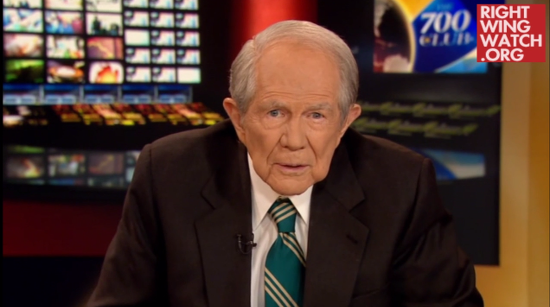 After making the claim that liberals love both LGBT equality and (somehow) radical Islam, Robertson concluded that the best thing for conservatives to do was “not to get involved but to instead just watch the two groups kill each other.”

Obviously, it’s a lie that liberals support radical Muslims. While I wish other so-called progressives would speak out more forcefully against faith-based extremism and acknowledge that religion is a big part of the problem, we accept the reality that the vast majority of American Muslims pose no threat to anyone and they’re as disturbed by violence done in the name of their faith as anyone else. But because President Obama doesn’t paint all Muslims with an irresponsible broad brush, Robertson assumes he’s weak or — as Donald Trump suggested — siding with the terrorists.

What’s amazing is that Robertson may deserve a pat on the back for merely wanting to sit on the sidelines, given that we’ve already heard from pastors who are taking joy in the deaths of dozens of gay people.

June 15, 2016
Did a Kansas Bible Store Accidentally Use an Anti-Christian Quotation In a Window Display Again?
Next Post