For all the talk of a Muslim terrorist, the people who are celebrating the deaths of 49 innocent people at a gay nightclub in Orlando over the weekend have included fringe Christians.

I guess we can add Orthodox Chabad Jew to that list with this rant by Yosef Edery: 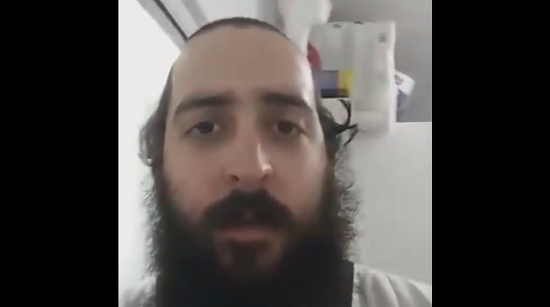 … I’m a religious Jew. And I’m sure many religious Muslims and even religious Christians will agree with me on this, if they ever went through the Old Testament. The Old Testament is a book that is respected by all faiths, and everybody knows that God says, “A man that will lie with another man, both of them shall be killed.”

So I don’t understand — you know, you might say “Twin Towers.” We’re not gonna get into if it was an inside job or not — but okay. People were killed in an act of terror. Fine. But here, we’re talking about a gay club getting, you know, rammed, you know, some terrorist came in there and did the job…

I’m Jewish. I would never do such a thing. But if an Arab did it, I mean, good for him. [Laugh]

The funny thing is that the people are praying to God throughout this whole ordeal… the world is confused. Only in a dream can you have two opposites co-exist. You can stick an elephant in the hole of a needle in a dream, and it makes perfect sense. Here, you see gay people praying to God to save them from the guy who came to kill them, when, if you knew anything about what God wants, you know that being gay is against God.

A Chabad spokesman was quoted as saying Edery didn’t represent “mainstream Chabad,” but once again, let’s remember that these people on the fringe are still using the same textbook as the people in the mainstream. You can’t dismiss him without also admitting that the holy book he’s citing has some problems.

June 15, 2016
Pat Robertson: Liberals Love Gays and Islamists; Conservatives Should "Let Them Kill Themselves"
Next Post