Did a Kansas Bible Store Accidentally Use an Anti-Christian Quotation In a Window Display Again? June 15, 2016 Hemant Mehta

Did a Kansas Bible Store Accidentally Use an Anti-Christian Quotation In a Window Display Again?

Last week, Terry mentioned that the Disciple Shoppe Bible Bookstore in Emporia, Kansas put up a(n alleged) Mark Twain quotation as part of a window display, apparently not realizing that Twain was actually mocking faith when he said, “The best cure for Christianity is reading the Bible.”

The image was posted online, everyone had a good laugh, and the store owner learned his lesson… right?

Maybe not. Because this is the new quotation outside the store: 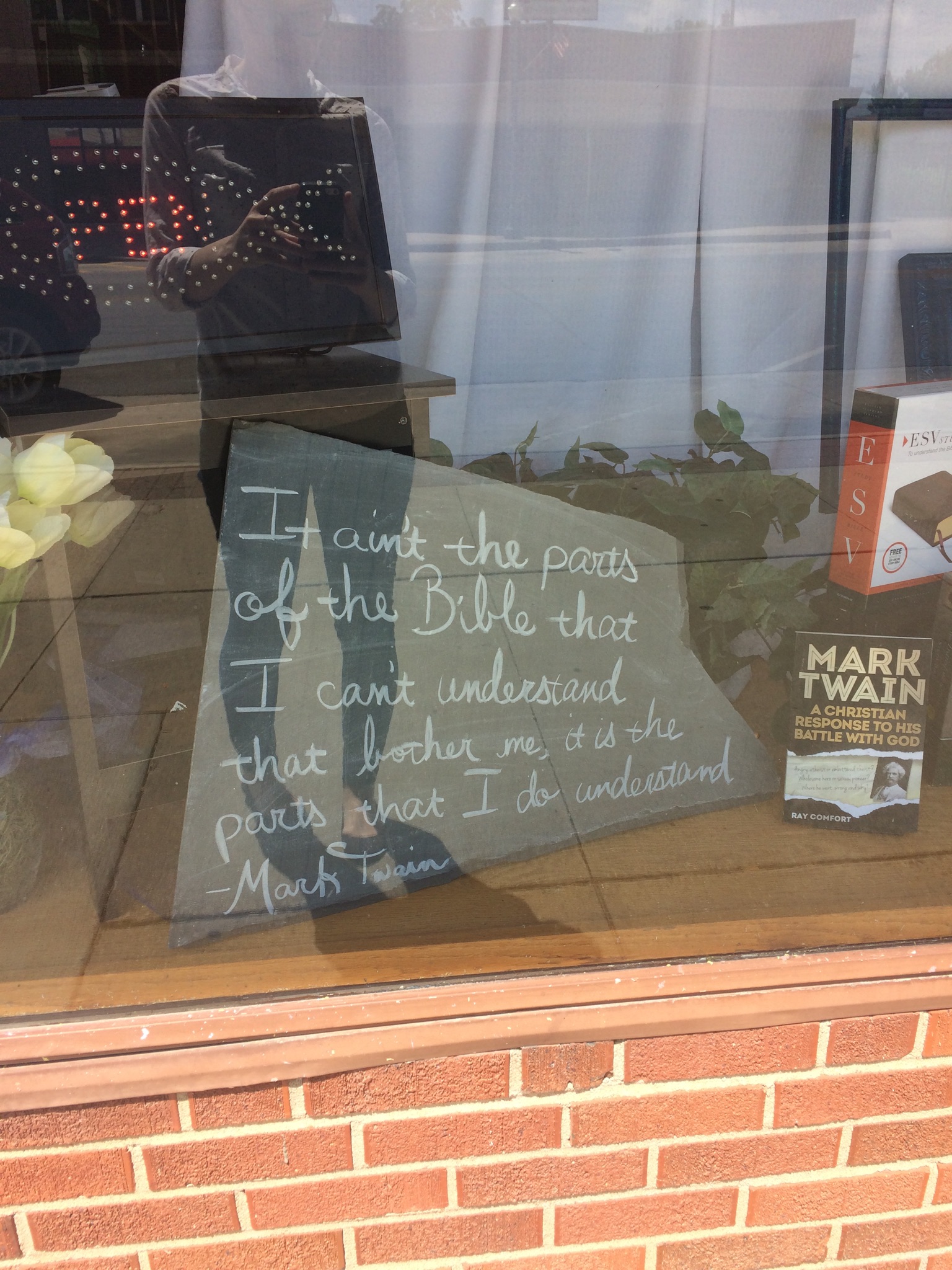 “It ain’t the parts of the Bible that I can’t understand that bother me, it is the parts that I do understand.” — Mark Twain

It’s brilliant wordplay by Twain, isn’t it? And he’s right: When you finally read the Bible for yourself, you realize how much nonsense is in it.

You could argue that the owner is just trying to advertise the Mark Twain book (by Ray Comfort) right next to the sign… but why would he pick that quotation unless he genuinely didn’t understand it?

Is Mark Twain trolling everyone from the grave or did the owner seriously make the same mistake twice?

The correct answer is neither.

Last night, I spoke with the store’s owner, Phil Peacock, to figure out what the hell was going on.

It turns out he understands exactly what Twain was saying.

He disagrees with the quotations, obviously, but he was hoping more than anything to spur interesting discussions with his customers. He wanted them to read the Bible — and raise their “biblical literacy” — so that they would understand it even better. After all, shouldn’t reading the Bible make people better Christians? And shouldn’t the parts of the Bible we understand bring us comfort? And shouldn’t we strive to understand the parts we don’t get?

I guess he didn’t anticipate that very different discussions would be taking place on Reddit Atheism.

I asked him if the experiment worked: Did he actually get to have the discussions he wanted? Not so much. A few customers asked him about the first quotation, but they didn’t have the extended conversations he was hoping for. That’s why he put up the second one this week.

He admitted that the more recent quotation (the one in the picture above) confused him a long time ago. He thought Twain was saying that the parts of the Bible that he understood — like Heaven and Hell, and the wages of sin being death — were bothersome, and that made perfect sense to him as a Christian because you should be worried about sin. But he eventually realized that Twain wasn’t thinking about it the same way.

Phil felt that if the quotation could be interpreted in multiple ways, even by himself, then all the more reason to use it as a conversation starter.

Either way, the case is closed. The joke’s not on Phil. He’s a good guy who knows exactly what Mark Twain meant. He added, however, that he’d be open to discussing the quotations with atheists as well.

Just in case any of you are in the Emporia area and have a desire to pick up a new Bible.

(Thanks to Victoria for the photo and Justin for the link)

June 15, 2016
Christian Extremist Theodore Shoebat: The State Should "Kill the Sodomites" with a Firing Squad
Next Post

June 15, 2016 Pat Robertson: Liberals Love Gays and Islamists; Conservatives Should "Let Them Kill Themselves"
Browse Our Archives
What Are Your Thoughts?leave a comment