After Anderson Cooper‘s fantastic interview yesterday with Florida’s anti-gay Republican Attorney General Pam Bondi in which he refused to let her off the hook for her past bigotry, you knew someone would try to defend Bondi.

Bryan Fischer is now coming to the rescue.

Instead of offering suggestions for how Bondi could have responded to the predictable questions, however, Fischer argued that Cooper, a gay man, should have recused himself from reporting on news stories involving LGBT issues because he’s inherently biased. 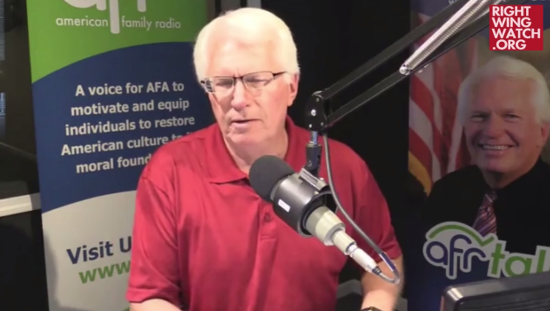 “Anderson Cooper, who is an open, admitted homosexual … therefore ought to recuse himself from any story like this,” Fischer declared. “He has no business trying to do journalism on an issue as fraught with emotion as the homosexual agenda. He’s disqualified from providing any kind of objective journalistic treatment of that topic.“

Mind you, Fischer didn’t offer a single example of a biased question Cooper asked and any decent reporter would have asked the exact same ones.

More to the point: This is a story about mass murder, not something like same-sex marriage (as if it matters). Why can’t gay people talk about it? If anything, the personal connection makes it all the more meaningful to hear their voices.

Cooper did nothing wrong. He was respectful and courteous, asking Bondi about her past on-the-record statements. If he made news, it’s only because we’re not used to hearing politicians called out on their blatant hypocrisy.

Maybe we can take Fischer’s comments more seriously when he promises not to talk about religious stories on his show. You know, since he’s too “fraught with emotion” over them.

June 15, 2016
Canadian Police Had to Break Up a Fight Over Whether the Earth is Flat or Round
Next Post