Televangelist Jim Bakker mentioned on his show recently that Donald Trump reminded him of Mr. Smith Goes to Washington. It’s a comparison that makes no sense at all since the classic film features Jimmy Stewart playing a decent man who goes into politics to make a real, positive difference in the world…

But that wasn’t nearly as bad as what guest Don Colbert said about Hillary Clinton: 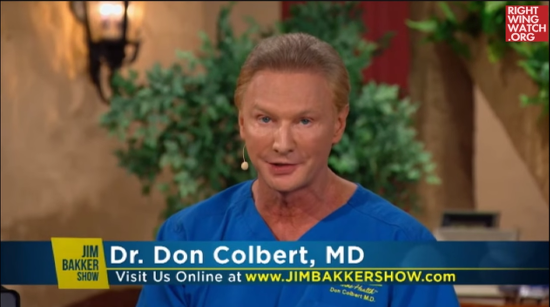 … we as Christians have got to make the right choice because if we don’t, this nation is in decline and this nation will be in judgment and our children and our grandchildren will not have the great America that we want for them.

We know that’s not true. If the spirit of the Antichrist were really in Hillary Clinton, her speeches would be way more exciting.

But everyone needs to make up their minds: Is she too religious, not religious enough, or excessively anti-religious?

It’s a question worth pondering while you’re eating a giant bucket of food.