Jim Deferio is one of those anti-gay Christian preachers who shows up at Pride parades with giant signs letting the crowd know they’re all going to Hell. At this point, it’s such a cliché, I wouldn’t be surprised if some people stood near him just so they could get a picture. 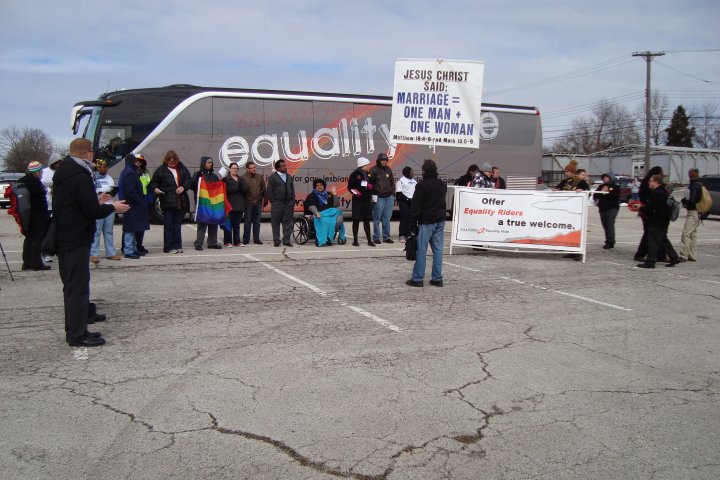 But let’s not forget it’s a pretty horrible thing, too. Someone is basically saying LGBT individuals are doomed to be tortured for all eternity because they’re not following this guy’s interpretation of his favorite book. If we weren’t so used to biblical bigotry, maybe we’d be more shocked.

Deferio has had less of an impact on recent Pride festivals in Syracuse, New York because police made him observe a 40-foot “buffer zone” away from participants. That’s about to change, though:

… this year, U.S. District Judge Lawrence Kahn ordered that Deferio must not be prohibited from protesting on the sidewalk in front of the festival entrance.

But the buffer zone at the yearly Inner Harbor festival restricted Deferio’s right to talk to people freely in a public space, Kahn ruled.

Video of prior years’ protests show Deferio did not block foot traffic or cause a safety problem, the judge ruled. And any concerns could be dealt with using less restrictive measures, such as an order that Deferio not block entrance to the festival, the judge ruled. (There’s no evidence Deferio blocked entrances in past years.)

In other words, because Deferio is in public space and not technically in the way of anyone there for the festival, there’s no legal reason he must remain at a distance. I guess you could call that a victory for free speech.

But it’s worth noting that Deferio has called for physical violence against the trans community, based on the sort of fear-based lies spread by conservative Christian groups:

If some dude goes into the rest room while your wife or daughter is in there you need to man up and knock the queer right out of them. Show no mercy. Yes, I am advocating violence — justified violence.

What’s to say Deferio wouldn’t physically attack people at the Pride event because he fears they’re “recruiting” kids or ruining straight marriages or some other bullshit Christian myth?

I’m all for freedom of speech, but the judge could easily have been justified in keeping the buffer in place based on the totality of Deferio’s views (and not just his actions at past festivals). Instead, he ignored the Facebook comment — it’s possible there are more where that came from — and LGBT people will now have another reason to be worried this Saturday when the CNY Fest takes place.

Avoid him if you can, everyone.

(Image via Facebook. Thanks to Chris for the link)

June 14, 2016
Florida's Anti-Gay Attorney General Pam Bondi Taken to Task by Anderson Cooper for Her Past Bigotry
Next Post