Florida’s Republican Attorney General Pam Bondi said in 2014 that recognizing same-sex marriages from other states would “impose significant public harm” to her state. She also supports Donald Trump, who wants to appoint Supreme Court justices that would overturn marriage equality.

So why would she suddenly claim to be on the side of LGBT people?

Oh, right. There was a tragedy in her state and she wants to pretend she has cared about LGBT people throughout her career.

Thankfully, CNN’s Anderson Cooper wouldn’t let her off the hook about her past actions, and the resulting interview was a glorious takedown of a hypocrite who’s only showing sympathy for LGBT people now that it’s politically useful for her to do so. 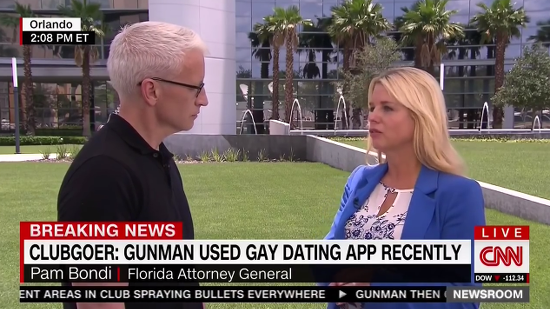 She may sincerely feel bad about the people who died in the massacre, but she has spent her career making sure LGBT people can’t have a life worth living. She was perfectly happy to make their lives miserable for years. How dare she expect praise for her newfound concern?

There’s no reason every interview with conservative Republican politicians can’t be exactly like this. Cooper deserves a lot of credit for showing his colleagues how to do it right.