Yesterday, Donald Trump performed a time-tested rhetorical trick that allowed him to lob scurrilous accusations without having to be accountable for them. 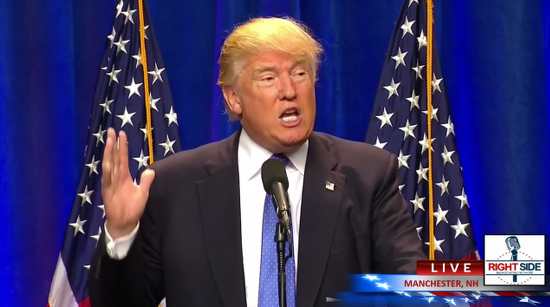 Following the country’s most deadly mass shooting, Donald Trump was asked to explain what he meant when he said President Obama either does not understand radicalized Muslim terrorists or “he gets it better than anybody understands.”

Trump never said he thinks that the president sympathizes with the terrorist who murdered 49 people in a gay club in Orlando — just that other people are saying that.

The other underhanded tactic that the presumptive Republican nominee uses is a variant of the above. He walks right up to the line of making a dark and nasty accusation, metaphorically pushes the toes of his loafers over it, then reins himself in by professing a sense of bafflement.

“Look, we’re led by a man that either is not tough, not smart, or he’s got something else in mind,” Trump said in a lengthy interview on Fox News early Monday morning. “And the something else in mind — you know, people can’t believe it. People cannot, they cannot believe that President Obama is acting the way he acts and can’t even mention the words ‘radical Islamic terrorism.’ There’s something going on. It’s inconceivable. There’s something going on.”

In that same interview, Trump was asked to explain why he called for Obama to resign in light of the shooting and he answered, in part: “He doesn’t get it or he gets it better than anybody understands — it’s one or the other, and either one is unacceptable.”

That’s all code for “Obama is secretly a radical Muslim,” which was also a big part of the subtext of Trump’s years-long birtherism. The language is so transparent that even Trump supporters who lack political sophistication (but I repeat myself) easily get it, but just slippery enough that Trump can maintain deniability.

For months, Trump has slyly suggested that the president is not Christian and has questioned his compassion toward Muslims. … On the campaign trail, Trump has repeatedly stated as fact conspiracy theories about the president, his rivals and Muslims, often refusing to back down from his assertions even when they are proven to be false.

Trump told a TV audience that he receives volumes of correspondence from people who agree with him on the subject of terrorism and Islam.

OK, well, he’s not completely wrong on the president, I think. Obama has to practice international diplomacy to get things done, and that often means using language that doesn’t needlessly offend 1.6 billion Muslims. I’ve criticized the president a couple of times for attempting to whitewash Islam’s dark side, but I realize it’s easy (that is, without great consequence) for me to call it like I see it. By contrast, the White House and the State Department have to do the hard work of building alliances even with questionable players, which no doubt requires a good amount of tongue-biting and nice-making. That’s a skill that Donald Trump doesn’t seem to possess, which makes his possible ascension to the Oval Office an extra-scary affair.

P.S.: Trump lives in a perpetual state of snit about the mainstream press, and he particularly dislikes the Washington Post. The Donald read the article I quoted above and decided that that was the last straw. Post reporters, he announced last night, will have their Trump campaign press credentials revoked.

June 14, 2016
Samantha Bee's Blistering Commentary on the Orlando Shooting: Stop Praying and Get to Work
Next Post