***Update***: The dead/wounded counts have gone up…

Last night, in Orlando, a shooter armed with an “assault-type rifle and a handgun” went to Pulse, a gay nightclub, and killed approximately 20 people and injured at least 40 more in what’s being described as an act of “domestic terror.” Officials said there may be a connection to “radical Islamic terrorism.” The killer eventually died in a shootout with the cops. 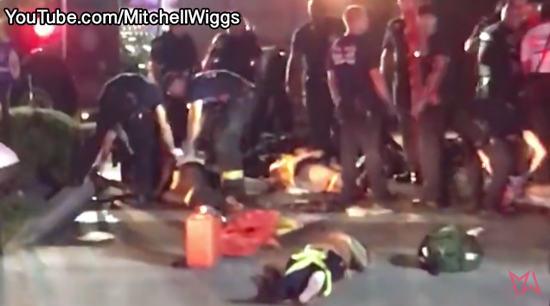 The details are still coming out and we’ll know more soon, but you can already sense some of the storylines that we’ll be talking about in the coming weeks: This massacre is another reminder that LGBT individuals are still targets in our society (even in places they believe are safe spaces), that we must find a way to better regulate access to weapons, that Islamic terrorism isn’t something that only happens in other countries and the beliefs that inspire it must be discussed, and your prayers aren’t going to do anything to help the victims. Obviously, we’ve all heard the stories about how gay people are thrown from the tops of buildings in countries where Sharia Law is in place.

It’s horrific no matter how you slice it. I doubt the details will makes this any less so.

For now, especially if you’re in the area, please consider donating blood. The company OneBlood is specifically requesting that people who are “O negative, O positive and AB donors to donate as soon as possible.”

June 12, 2016 How They See Us (Special Outpouring of Hate Edition)
Browse Our Archives
What Are Your Thoughts?leave a comment