Mythicist Milwaukee is the group that provided that livestream of the Reason Rally and they just released a video of the full event. It’s not the official video, and not every speaker is included in this cut, but you do get a real sense of what took place last weekend.

I was there and missed a lot of what happened on stage because I was walking around, doing my own thing, but I really enjoyed hearing some of the talks I didn’t catch at the event.

Bill Maher‘s speech (delivered by video since he couldn’t be there in person) is particularly entertaining: 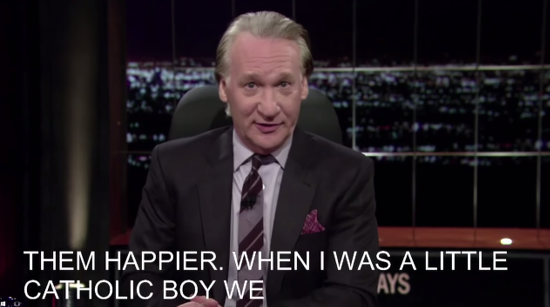 Hello there, my fellow atheists! I’m so very sorry I can’t be amongst your rational selves on this fine day, but I’m afraid I was needed elsewhere, in the hinterlands, following my life-long pursuit of converting religious people back into heathens. And thereby making them happier.

You know, when I was a little Catholic boy, we used to say the Act of Contrition, which began, “O my God, I am heartily sorry for having offended Thee.” [Laughs] And even then, I thought, why are we always putting guilt upon ourselves for offending this cartoon character that was made up in the Year 1?

Among the many things I’ve never understood about religion is: In a world where we all have enough people above us who we have to answer to — a boss, a supervisor, a spouse, even your fucking kids, for some of us a parole officer, or in my case a court-appointed psychiatrist, whatever — we all have people whose asses we have to kiss to get through life. Why would you then choose to create a completely imaginary person who you live in fear of offending? Aren’t we all disappointing enough people in reality?

Well, thank you for listening to my message of hope. [Laughs]

And please take heart in the knowledge that we are winning! Just slowly and not yet.

But religion is way down in America. They do a comprehensive survey every ten years and Christianity is down 11%! That may not seem like a lot, but if you were CEO of McDonalds, and your market share fell 11%, you’d commit seppuku tomorrow.

Now why is religious down so much? Well, I’d like to think I had something to do with it. [Smiles]

But really, I’m like Reagan when the Soviet Union fell. I hoped at the end that it was ready to go. We’re 400 years into the Scientific Revolution. It’s time to put the silly, intellectually embarrassing myths to bed.

Thank you for being strong and keep talking to people about it.

The video of the full Rally is over six hours long, but if any other parts stand out to you, please leave the timestamp/summary in the comments!

June 12, 2016
Is It Harder Being a Gay Person in Church or a Christian at the Pride Parade?
Next Post