With Lie About the Reason Rally, Freedom From Atheism Foundation Smears the Godless… Again

The Freedom From Atheism Foundation would never lie about atheists, except on any day that ends in the letter y.

This went up on the outfit’s Facebook page this morning: 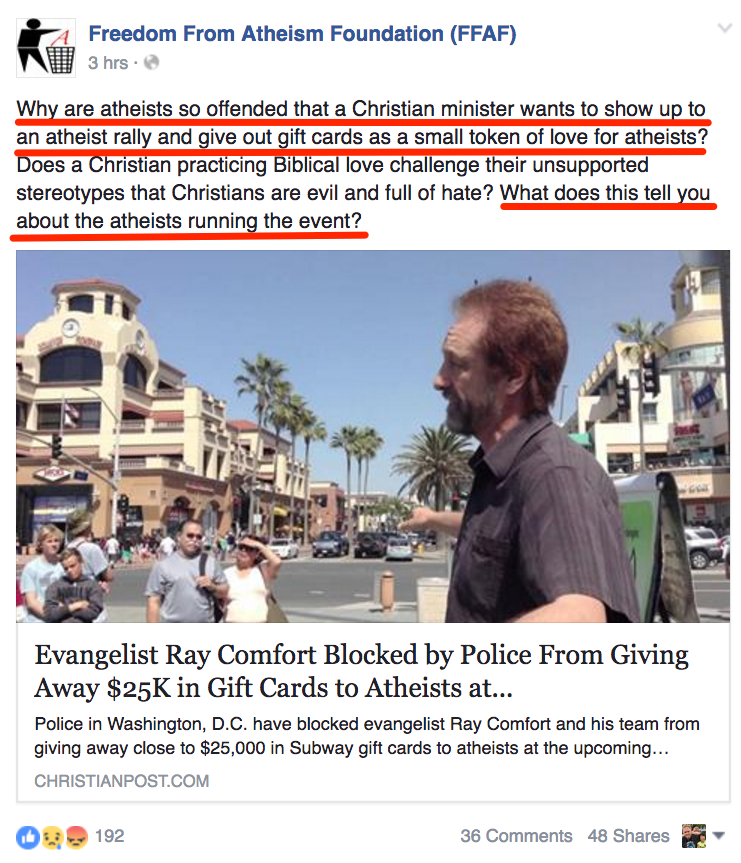 Why are atheists so offended that a Christian minister wants to show up to an atheist rally and give out gift cards as a small token of love for atheists? Does a Christian practicing Biblical love challenge their unsupported stereotypes that Christians are evil and full of hate? What does this tell you about the atheists running the event?

The May 30 Christian Post article the FFAF links to is correctly reported: It was the D.C. police, not the organizers of the Reason Rally, who asked Comfort and his cronies to stand down, as their predicted number had grown as large as a thousand Christians; a counter-demonstration of that size requires, at the very least, a permit.

Lots of us, me included, said we would would actually welcome Comfort’s presence at the Mall, on free-speech grounds. Plus, hell, who doesn’t like free Subway sandwiches? (Comfort eventually showed up with a smaller group, taping footage for his next movie, something he posted about multiple times on social media.)

It’s bizarre that the FFAF lobs the false accusation in the first place, much less almost two weeks after the facts were reported on Friendly Atheist and in hundreds of other places, and a full week after the Reason Rally actually took place.

As for the lie: It’s almost as if no one at the FFAF pays any heed to the Christian commandment against bearing false witness. Shocking, I know.

As for the timeline: the FFAF isn’t particularly adept at reading a calendar, I guess. Its own website has been out of commission for a week now, apparently due to non-payment of the domain fee.

Maybe one of us could buy the domain and use it to expose the serial lies of the organization’s Facebook team?

June 11, 2016 Sky News' Alastair Bruce Claims in Recent Broadcast That There Are No Atheists in Foxholes
Browse Our Archives
What Are Your Thoughts?leave a comment