Sky News’ Alastair Bruce Claims in Recent Broadcast That There Are No Atheists in Foxholes June 11, 2016 Hemant Mehta

While our friends in Britain are celebrating the Queen’s 90th birthday, one commentator on Sky News was busy slandering atheists.

During a segment about recent demographic changes, anchor Colin Brazier brought up that, over the Queen’s reign, they’ve seen a significant drop in the percentage of Christians (despite the Queen being a Christian herself). In fact, one analysis last month found that there are now more people in England and Wales without religion than there are all Christians combined.

Reporter Alastair Bruce accepted those numbers, but went on to give a lengthy response that boiled down to the old “There are no atheists in foxholes” lie: 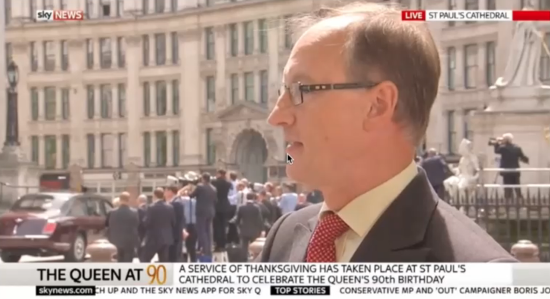 It’s a much more secular environment, we’re told. And I think that, I was mentioning before that, as a soldier, I’d been in positions where a lot of soldiers who claim to have no faith actually turn to it when times got a bit tougher. And maybe life is pretty easy, in the broader sense of that word… and I think, very often, it has been parts of the world where life has been tougher where the faithful can be more easily found.

It’s complete nonsense, of course. There are indeed atheists who are willing to put their lives on the line, even when times are tough, and it’s deeply offensive to dismiss their sacrifices by suggesting that they toss aside their philosophy in the face of danger.

Even if he didn’t mean to be so dismissive, Bruce owes an apology to every atheist in the military (or a poor neighborhood, for that matter). And he should explain why he’s wrong — why, despite what he may have experienced personally, he has since learned that atheists give their lives for their countries on a regular basis.

(Thanks to Lloyd for the link)

June 11, 2016
With Lie About the Reason Rally, Freedom From Atheism Foundation Smears the Godless... Again
Next Post