The last time we wrote about the Dutch ark that was built by Bible-besotted carpenter Johan Huibers, we wished it bon voyage and Godspeed.

Noah’s ark crashed into a Norwegian Coast Guard patrol boat in the Port of Oslo on Friday morning.

It was not, of course, the actual ark, but one of two reconstructions that a Dutch carpenter named Johan Huibers painstakingly built over seven years, based on the biblical description. 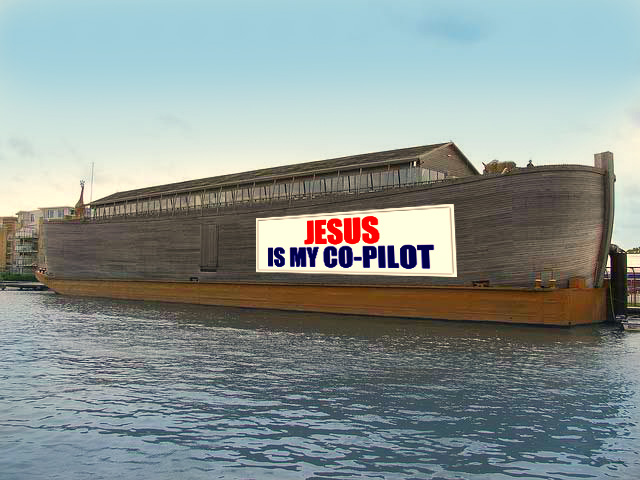 The smaller of the arks was being towed on Friday when the crew lost control, which led to the collision. No animals were on board and no one was injured, but the ark’s wooden cladding was damaged. A small crane on the patrol boat was also damaged, Lt. Rune Svartsund, a coast guard spokesman, said. Ole Herman Kjernsby, the head of travel at Stena Line, a ferry company based in Oslo, said his staff members did not witness the accident but could see the damage to the ark afterward, including what he called “a huge rift” in the side.

It’s OK. In the world of Christianity, another rift isn’t a big deal.

“I’m shaking now,” Mr. Huibers, 58, said by telephone from Amsterdam. “It’s a terrible situation. It’s an awful dream, to have an accident with the ark of Noah.”

He said he would travel to Norway “with wood, nails and a hammer to repair it.” It’s probably too much to hope for that he uses the larger ark to do it.

The smaller ark was the first one he built, between 2005 and 2007, Mr. Huibers said, which helped prepare him to tackle the second one at a more biblical scale — about 410 feet long, 95 feet wide and 75 feet tall. The bigger one has five decks and can accommodate 5,000 people at a time; it moved to Rotterdam earlier this year from its previous mooring in the Dutch port of Dordrecht. Both arks are built on steel barges, and neither has an engine; they must be towed wherever they go.

“It is unclear what happened to the 8.7 million x 2 animals on board,” Tom Egeland, a crime novelist who lives in Oslo, wrote on Twitter, using one estimate of the number of species on the planet.

“The 900-year-old captain has been detained,” Jon Are Rakvag, a software security architect for the Norwegian Police Service, wrote in a Twitter post.

Can you do better than that? Let’s have a blasphemy-off in the comments.

June 11, 2016
Donald Trump: We Live in a Judeo-Christian Nation Because "That's the Way It Is"
Next Post

June 11, 2016 With Lie About the Reason Rally, Freedom From Atheism Foundation Smears the Godless... Again
Browse Our Archives
What Are Your Thoughts?leave a comment