Donald Trump is slated to speak at the Faith and Freedom Coalition’s “Road to Majority” conference in Washington, D.C. later today, so let the speculation begin on how he’ll embarrass himself this time.

When that happens, though, at least he won’t be alone.

Senator David Perdue of Georgia made a joke this morning, speaking to the same crowd, about how he couldn’t wait for President Obama to leave office, referencing a Bible verse that actually calls for his death. 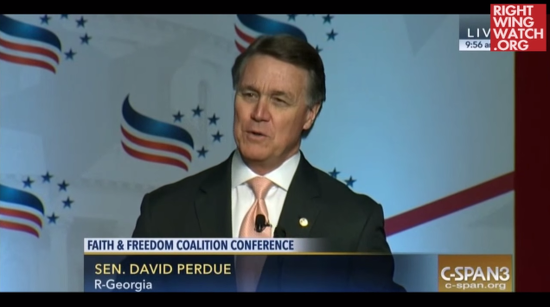 … I think we should pray for Barack Obama, but I think we need to be very specific about how we pray. We should pray like Psalms 109:8 says. It says, “Let his days be few. And let another have his office.”

I know! A Christian cherry-picked a verse from the Bible without actually reading it?! I’m shocked, I tell you. Shocked.

His comment also feeds right into the hands of Bible critics. Because for every nugget of wisdom Christians think appears in the Good Book, there’s another verse in there that’s horrific and indefensible. Today, Perdue reminded us that it may even appear in the very next passage.

June 10, 2016
Why Did NASA Issue a $1.1 Million Grant to Study How Alien Life Could Impact Christianity?
Next Post