Georgia Baptist Leader: I Support Religious Liberty for Everyone… Except Muslims

Gerald Harris, a Baptist leader from Georgia and the editor of the Christian Index newspaper, doesn’t think religious freedom applies to all people. 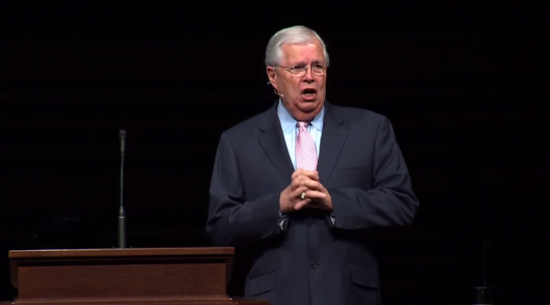 In an editorial complaining about the multiple Christian groups defending New Jersey residents who face opposition in building a mosque, Harris can’t wrap his mind around the idea of helping Muslims who want the same religious freedoms as everyone else:

While Muslims around the world and in our own country are shouting “Death to America” should we be defending their rights to build mosques, which often promote Sharia Law and become training grounds for radicalizing Muslims?

When we engage in a crusade to grant political Islam all the rights and privileges of other religions, we are not engaged on a level playing field. We are not comparing apples to apples. The more leniency we give in the present to Muslims who may desire Sharia Law, the less freedom we will be giving in the future to ourselves.

That only makes sense if you hold a Donald Trump view of Islam, in which all Muslims are terrorists in the making if not the real thing. It’s complete bigotry.

The 20 or so religious groups defending the Muslims deserve a lot of credit for the stance they’re taking. It shouldn’t be courageous to say everyone deserves the right to believe as they wish but that’s apparently a controversial position in some Christian circles.

Russell Moore of the Ethics and Religious Liberty Commission of the Southern Baptist Convention properly slammed Harris for his narrow thinking:

Some would say, based on their reading of the Koran, that non-violent Muslims are inconsistent Muslims, the equivalent of cafeteria Catholics. The government’s job, though, is to punish evildoers for evil-doing, not to decide who is most theologically consistent with their professed religions.

… the idea that religious freedom should apply only to Christians, or only to religious groups that aren’t unpopular, is not only morally wrong but also self-defeating. A government that can tell you a mosque or synagogue cannot be built because it is a mosque or a synagogue is a government that, in the fullness of time, will tell an evangelical church it cannot be constructed because of our claims to the exclusivity of Christ.

That’s the right approach. Just as church/state separation groups would defend Christians’ right to practice their faith in private, or as individuals, religious liberty groups should never hesitate in defending the religious liberty of non-Christians. Because if it’s ever taken away from one group, it could easily happen to another.

(via Religion News Service. Screenshot via YouTube. Thanks to Brian for the link)

June 10, 2016
Klepto Clergyman Spent His Ill-Gotten Gains on Getting More Religious
Next Post