Jimmy Carter has been one of the more active ex-Presidents, using whatever power and influence he still has to draw attention to issues he’s passionate about. There’s obviously his charity work with Habitat for Humanity. But more controversially, in 2000, he left the Southern Baptist Convention over its shoddy treatment of women. And in 2004, he slammed a proposal by Georgia’s Department of Education to get rid of the word “evolution” from the state’s science curriculum.

Carter said at the time:

“The existing and long-standing use of the word ‘evolution’ in our state’s textbooks has not adversely affected Georgians’ belief in the omnipotence of God as creator of the universe,” Carter said. “There can be no incompatibility between Christian faith and proven facts concerning geology, biology, and astronomy.

“There is no need to teach that stars can fall out of the sky and land on a flat Earth in order to defend our religious faith.”

I don’t share Carter’s view that science and religion are compatible, but his point was clear that evolution was accepted science and it was foolish for religious people to run away from it as a way to maintain their faith.

It doesn’t surprise me, then, that Carter would make an appearance at any large, new ministry dedicated to promoting the Christian faith. Especially one that’s still in the process of being built.

Unfortunately, Carter made a visit to Ken Ham‘s Noah’s Ark theme park this morning, a visit which Ham will undoubtedly use in the future as an endorsement of his beliefs: 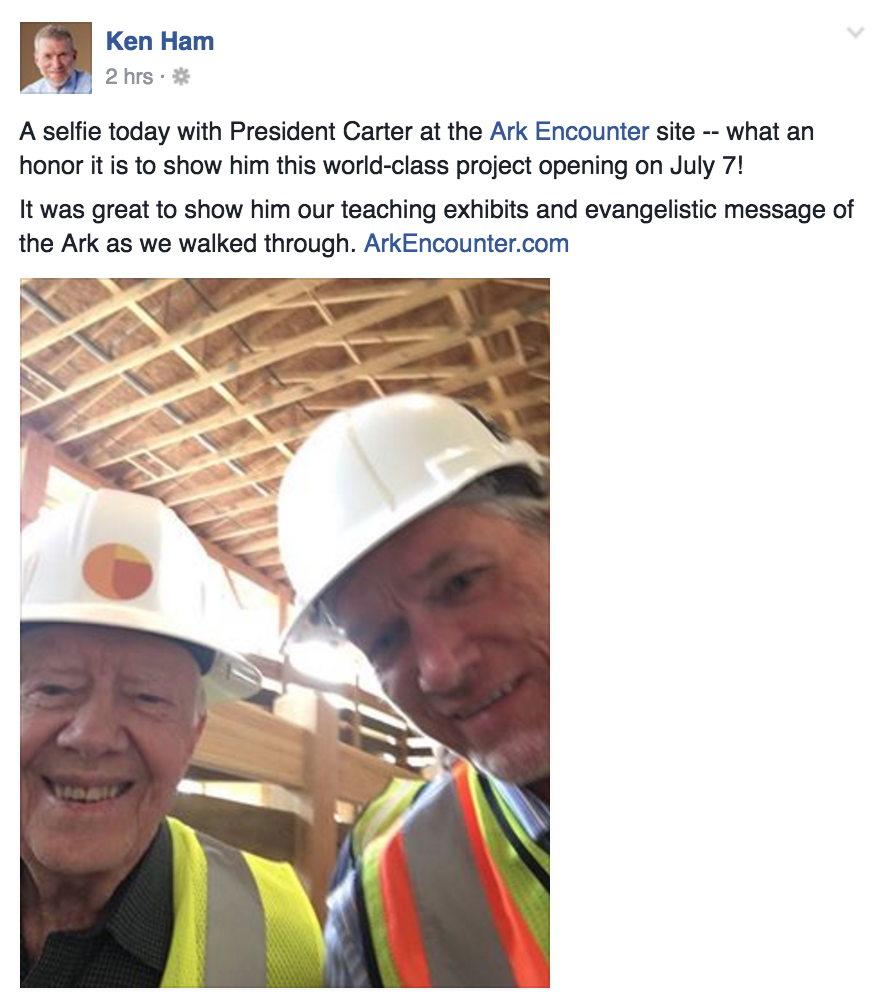 A selfie today with President Carter at the Ark Encounter site — what an honor it is to show him this world-class project opening on July 7!

It was great to show him our teaching exhibits and evangelistic message of the Ark as we walked through. ArkEncounter.com

I’m curious to hear what Carter thought about the exhibits. After all, for a man who has long promoted science education, Ark Encounter is a $100 million attempt to brainwash kids into thinking the Bible is literally true and that the science they learn in school is part of some sort of secular conspiracy.

Carter’s people told reporters that he was only there to “support a friend [LeRoy Troyer] who was instrumental in the construction of the massive structure.” Just remember that when Ham attempts to use this as propaganda.