Christian pseudo-historian David Barton, best known for telling lies and convincing other ignorant people to accept them, has some advice on how to respond to advocates of church/state separation.

Here’s how bad it is: Barton couldn’t even come up with a realistic situation where a church/state separation group would get involved. 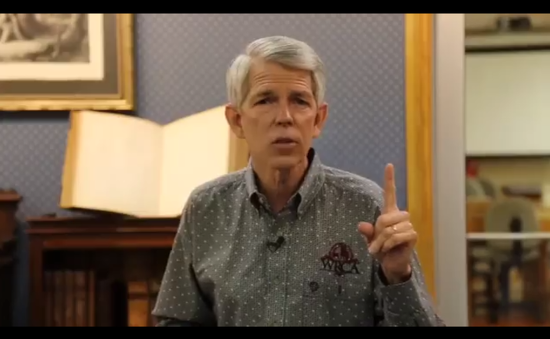 Right off the bat, Barton feeds us bullshit.

Students are absolutely allowed to pray over their lunches in school. Teachers can’t lead the prayer, but no group like FFRF or the ACLU would ever waste any time going after students for saying grace before a meal.

But if that ever happened, how should you respond?

Barton Answer 1) Ask the person where the phrase comes from. When they say “The Constitution,” ask them to point it out. It’s not there!

It’s true that the phrase “separation of church and state” isn’t in the Constitution. But Barton neglects to mention that the First Amendment makes very clear that “Congress shall make no law respecting an establishment of religion, or prohibiting the free exercise thereof.” As far as the courts as concerned, that means government institutions cannot endorse or promote religion — or atheism, for that matter. “Separation of church and state” is merely shorthand for that idea.

Barton Answer 2) The First Amendment refers to Congress! What does that have to do with a kid praying over his lunch?

Nothing. Nothing at all. That’s why no one would ever complain about a kid praying over his lunch. This is a scenario that only exists in the minds of David Barton and the screenwriters for God’s Not Dead 3.

Barton Answer 3) If praying over a lunch is so bad, why did we do it for 180 years? Why are people only complaining about it now?

Setting aside the fact that no one gives a damn how a kid wastes his lunch period, Barton’s point here boils down to “It’s tradition!” There’s a good reason people didn’t fight church/state separation issues for a long time. There weren’t always groups dedicated to fighting those battles, and many activists knew damn well their careers and lives could be in jeopardy if they challenged the Christian majority. Even now, many potential plaintiffs are hesitant to file a lawsuit because they know it would invite a constant stream of harassment from the community.

This argument makes as much sense as saying, “Conservative Christians didn’t really complain about transgender people before a couple of years ago, so it must not have been a problem before that!” Barton, I’m sure, would be quick to tell you it was always wrong to be transgender — but only recently have Christians started to focus on making trans people’s lives a living hell.

What Barton doesn’t get — and refuses to educate himself about — is that church/state separation isn’t a form of Christian persecution. It’s often just a matter of reining in Christian privilege.

June 10, 2016
Miss California Prayed In Vain For God To Help Her Answer a Question About Poverty
Next Post