It takes a lot of creative reading if you want to think of the Bible as a truly “Good Book.” So maybe its no big surprise that the staff of a Bible store in Emporia, Kansas interpreted a purported Mark Twain quip about Christianity in a positive light, even writing it on a slate tablet and putting it in the shop window. 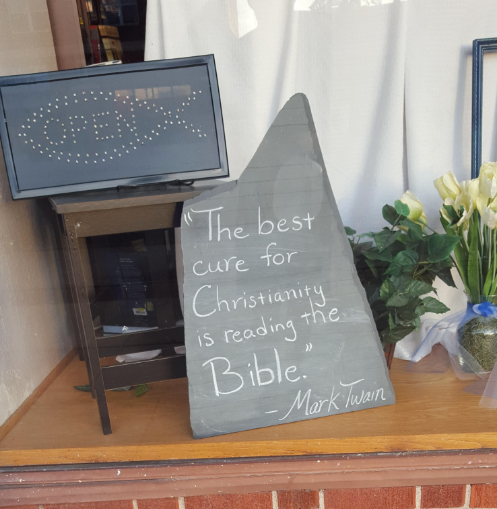 “The best cure for Christianity is reading the Bible,” the quote reads, with many internet users pointing out they may have not fully understood its meaning.

Of course, “to cure” can mean to pickle or preserve, such as preventing perishable foods, like meat, from spoiling. If you read it like that, it might seem like an endorsement. But it’s safe to say that the line was meant to convey that the Bible, as a set of moral guidelines, is such a preposterous book that it will quickly put the reader off Christianity.

Mitch Hoover, from Wichita, Kansas, posted the image online with the caption: “Ummm… I don’t think that quote means what you think it means.”

The quote is widely attributed to author and humorist Mark Twain, though it’s not a confirmed quote of the author. It has been widely used by atheists in discussing the Bible and now the quote is once again being shared online.

The Bible shop may have just been demonstrating its sense of humor.

Yeah, let’s go with that. What’s one more little delusion in Christianity’s tapestry of silly shams?

June 10, 2016
Mel Gibson is Gearing Up to Make The Passion of the Christ 2
Next Post