But a proclamation promoting an upcoming Christian event goes much further than those examples, and the American Humanist Association is now calling for Branstad to withdraw his signature. 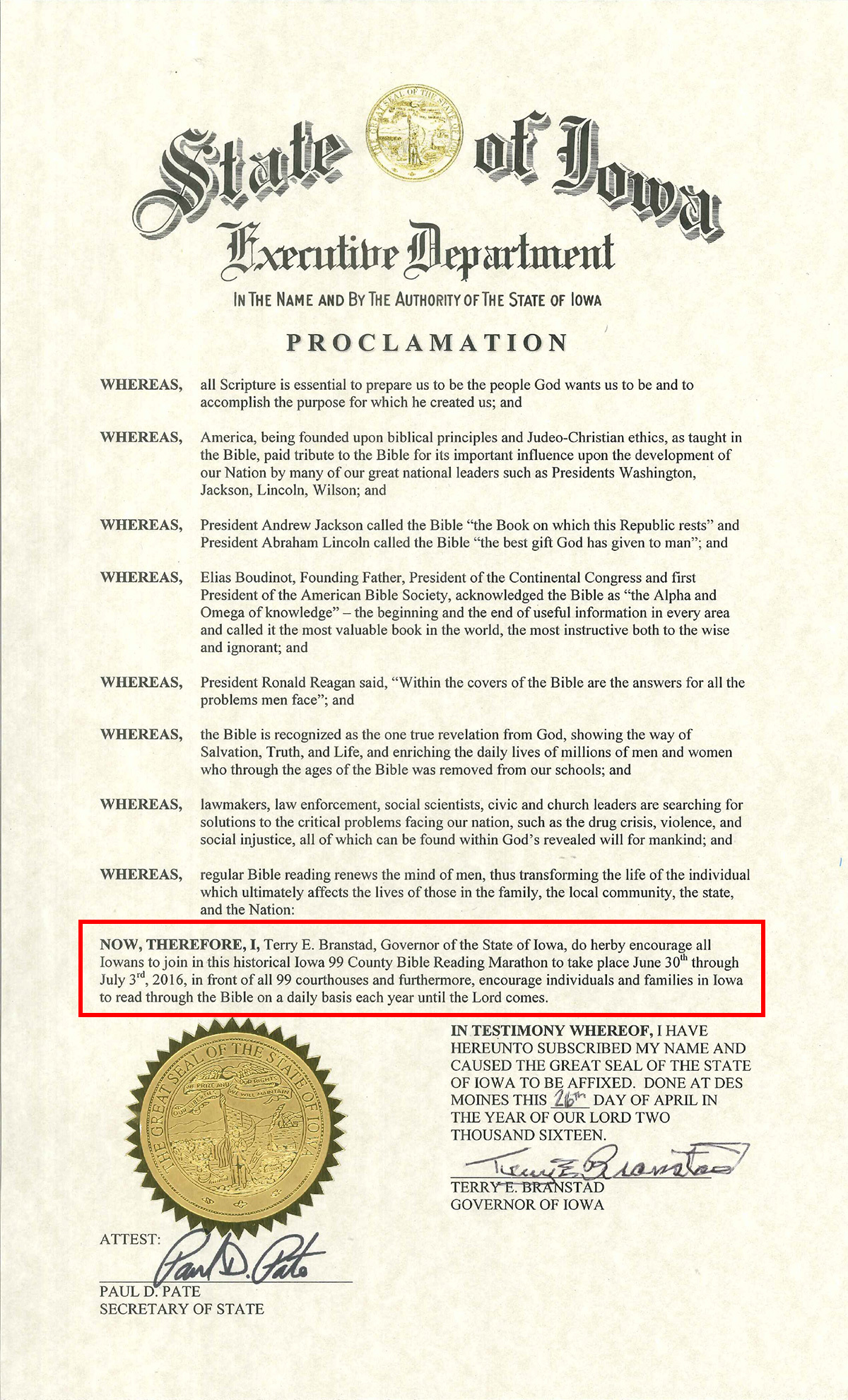 While the clauses in the proclamation, which are written by the Christian groups, promote the Bible’s “truth” non-stop, it’s the ending that’s a problem for me. See if you can figure out why it’s controversial:

… I, Terry E. Branstad, Governor of the State of Iowa, do herby [sic] encourage all Iowans to join in this historical Iowa 99 County Bible Reading Marathon to take place June 30th through July 3rd, 2016, in front of all 99 courthouses and furthermore, encourage individuals and families in Iowa to read through the Bible on a daily basis each year until the Lord comes.

I don’t mind the meaningless encouragement of a Bible-reading marathon, but the Governor is explicitly telling Iowans to read the Bible every day “until the Lord comes,” as if that’s a foregone conclusion and suggesting that the Bible has any real wisdom in it.

The endorsement is a slight against every Jew, atheist, Muslim, and non-Christian in the state.

“The governor’s endorsement of the Bible violates our nation’s founding principle of the separation of religion and government,” said Roy Speckhardt, executive director of the American Humanist Association. “In exalting Christianity above all other religious and nonreligious worldviews, the governor is discriminating against non-Christian citizens and infringing upon their right to be free from religious coercion by the state.”

This week, the AHA’s Appignani Humanist Legal Center, ACLU of Iowa, Freedom from Religion Foundation, and Iowa Atheists and Freethinkers all urged Branstad to take this one back:

“As governor, Terry Branstad has a duty to uphold the Constitution, a duty he clearly ignores by using his office to promote Christianity,” said David Niose, legal director of the American Humanist Association. “The governor is inviting litigation by showing a complete disregard for the Establishment Clause, and we urge him to withdraw the proclamation immediately.”

FFRF also went after the Christian groups’ content in a letter to Branstad:

“By issuing this intensely religious proclamation and encouraging bible-reading, you send a message that Iowa prefers religion over nonreligion, and the Christian religion over any other religion,” FFRF Staff Attorney Andrew Seidel writes to Gov. Terry Branstad. “The separation between state and church is among the most fundamental principles of our system of government. Our founders valued this principle, and your proclamation betrays their sacrifice.”

The decree is filled with troubling explicitly theological declarations, such as that the “bible is recognized as the one true revelation from God, showing the way to salvation, truth and life” and that it is “God’s revealed will for mankind.” FFRF asserts that such statements violate the government’s most sacred obligation — to let citizens worship without fear or coercion. It is therefore an abuse of the governor’s office and power.

The proclamation also contains a number of errors. It attributes to Andrew Jackson a quote that quite certainly does not exist. It makes the founding fathers seem like devout Christians, counter to the historical record. And it declares the bible a panacea for our social ills, which is contrary to all real-world evidence.

Obviously, this is not a law. But it’s still the Governor’s endorsement of a particular religion, with language that we never see in similar proclamations for non-Christian groups. Branstad would never encourage Iowans to read the Qur’an daily, just as he wouldn’t tell citizens to drop their faith because it’s a waste of time. It’s not his job (as Governor) to tell people how or what to believe.

Whether anything will come of the complaints, I don’t know, but this is yet another reminder of what Christian privilege looks like in this country. While other groups get nothing more than a mere acknowledgment of their existence, Christians get a paragraph-long promotion of their delusions from the highest office-holder in the state.

Branstad could easily have said he welcomes the Bible-reading marathon and left it at that. Instead, he took it further and Christian groups are now pretending like this is perfectly normal behavior. It’s not. This is what government promotion of religion looks like.

June 9, 2016
Here's the Inspiring Speech Richard Dawkins Couldn't Give in Person at the Reason Rally
Next Post