Richard Dawkins would no doubt have been the biggest name at the recent Reason Rally, but his health issues — he’s recovering from a minor stroke he had back in February — kept him from traveling to Washington, D.C. in person.

Though he couldn’t be there physically, Dawkins recorded a message that was played at the actual event, and it’s now online for everyone to hear.

He sounds healthy, at least on the surface, and the speech is as wonderfully blunt and inspiring as his books. The full transcript is below. 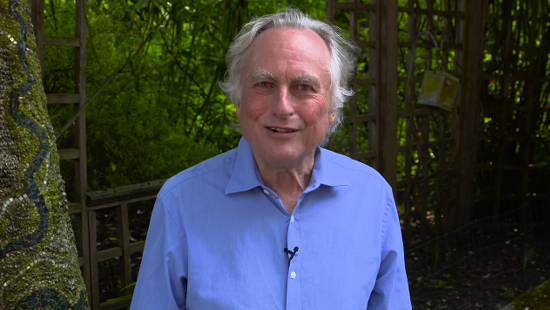 There are those who fear reason as cold, bleak, cheerless, unpoetic. That’s not just untrue; it’s the very opposite of true. Science is the poetry of reality.

The fact that you exist should brim you over with astonishment. You and I and every other living creature are machines of ineffable complexity. This complexity and its powerful illusion of design is why so many people succumb to the God temptation. The temptation to evade, by invoking a designer, the responsibility to explain. The God temptation is an evasion of responsibility because it invokes the very kind of thing it’s supposed to be explaining.

I’m a biologist, so I speak first of the biological version of the God temptation, the false argument destroyed by Darwin. There’s also a cosmological version. The fundamental constants of physics are said to be “fine-tuned” so that, in the fullness of time, eyes and peacocks, humans and brains will come into existence. The God temptation here is to invoke a divine knob-twiddler to adjust the dials of the physical constants so that they have the exquisitely precise values required to bring evolution, and eventually us, into being.

Nevertheless, it’s hard not to feel sympathy for such cowardice. The complexity of a living body, every one of its trillion cells, is so mind-shattering to anyone who truly grasps it, the temptation is overwhelming. It’s like when you see a really brilliant conjuring trick. You have to smack yourself and say, “No!” However largely my senses and my instincts are screaming “miracle,” it really isn’t. There is a rational explanation. In the case of the conjuring trick, we know it’s not a miracle. And honest conjurers like Jamy Ian Swiss, James Randi, and Penn & Teller tell us so.

In the case of nature’s apparent miracles, Charles Darwin plays the role of honest conjurer.

But conjurers only tell us that it’s a trick. Darwin tells us exactly how nature’s trick is done: cumulative natural selection. Darwin’s brilliant explanation has withstood 150 years of sustained attack and emerged without a scratch.

Physicists are well on their way to disposing of the cosmic God temptation, too.

My book The God Delusion, celebrating its tenth anniversary in 2016, provoked a score of what came to be called “fleas”: religious books with plagiaristic jacket designs and parasitic titles like The Dawkins Delusion or Deluded By Dawkins. The flea name came from a line of WB Yeats: “But was there ever dog that praised his fleas?”

Some of our best theologians, if indeed theology is a subject that can be good at all, if indeed theology is a subject at all, some of our best theologians pathetically tried to argue that, far from being complex, God is simple. There is no limit to the explanatory purposes to which the simple God’s infinite power is put. Is science having a little difficulty explaining X? No problem! Don’t give X another glance! God’s infinite power is effortlessly wheeled in to explain X. Along with everything else. And it’s always a simple explanation, because, after all, there’s only one God. What could be simpler than that?

The effrontery of it is beyond astounding. This supposedly simple God had to know how to set the nuclear force 1039 times stronger than gravity. He had to calculate with similar exactitude the requisite values of half a dozen critical numbers — the fundamental constants of physics.

Do you, with your prodigiously complex brain, understand quantum mechanics? I don’t! Yet God, that paragon of ultimate pure simplicity, not only understands it but invented it! Plus special and general relatively. Plus the Higgs Boson. And dark matter.

Finally, the icing on the cake: On top of being the ultimate mathematics and physics genius, this “simple” God has enough bandwidth to listen to the prayers of billions of people simultaneously, in all the world’s languages. He hears their confessed sins and decides which would be forgiven. He weighs up which cancer patients shall recover, which earthquake victims shall be spared, even who shall win a tennis match. Or a parking space.

God may be almighty, all-seeing, all-knowing, all-powerful, all-loving, but the one thing He cannot be, if He’s even minimally to meet His job description, is “all-simple.” The statistical argument against the divine designer remains intact and inescapably devastating.

God also presents a temptation to laziness that may define our allegiances.

I am Christian! Well, of course I don’t believe in any of that supernatural stuff, but I was baptized, we go to church at Christmas, and I’m certainly not Jewish or Muslim, so I guess that makes me Christian!

By 2050, the population of Mauritania will be predominantly Muslim. It’s simple demography. Just compare the birthrates of the different communities in Mauritania. That makes the lazy assumption that a child of Muslim parents is defined as a Muslim.

Would you define a child as a Keynesian on the basis of her parents’ economic school of thought?

One of the reasons I formed the Richard Dawkins Foundation for Reason and Science in the United States is to combat America’s legendary religiosity, a form of obstinate backwardness that has serious implications for the rest of the world.

What church do you go to? The question is presumptuous to the point of rudeness, yet informant after informant tells me how often it’s thrown at newcomers to certain neighborhoods in America, as casually and automatically as a comment on the weather. That the newcomer might not attend the place of worship at all simply doesn’t cross the friendly neighborhood mind. It doesn’t cross the mind of a typical American politician, either, which is why they drag God into every speech, why they bend over backwards to appease religious lobbies when taking important decisions on abortion, stem cell research, and the teaching of evolution.

The Reason Rally is the antidote to all this. Today, in Washington, we celebrate science and urge the retreat of superstition. It is people like you, people who have traveled far to be here, who support secular organizations with your time and money, who are courageous enough to make their atheism known, that are the hope for the future.

I’m sorry doctor’s orders stop me from being in Washington today, except by this minor miracle of science, but I hope to see you at the next Reason Rally!

It would’ve received one hell of a standing ovation in person. Here’s hoping his health allows him to attend the next Rally, whenever that may be.

June 9, 2016 Iowa Governor Issues Proclamation Urging Citizens to Read the Bible Daily "Until the Lord Comes"
"Poor kid, should be taken in custody of social services!!"
Jara Rank Christian Sues School After Daughter Gets ..."
"What are the women complaining about. They get the inside lanes, therefore a shorter distance ..."
Kevin Pennington When a Muslim Woman Was Harassed ..."
"The enemy of my enemy. He hates Jews, but he hates rational people more."
Matt G Rick Wiles: People Vaccinated with “Satanic ..."
"Rev. Hibbs argues that god created LGBTQ people. He also argues that god doesn’t make ..."
Silverwolf13 Hate-Preacher: If Evolution’s True, There’d Be ..."
Browse Our Archives
What Are Your Thoughts?leave a comment