Christian Woman Reflects on Her Lesbian Youth, When She Used “Men’s Bathrooms and Dressing Rooms”

The women on the right, in the picture below, is Emily Thomes. She’s a “wife, speaker, avid Facebooker, and a member of Christ Community Church of Texarkana, Texas” who “aspires to be a homeschool mother and blogger.”

In other words, a perfect little fundamentalist Christian. 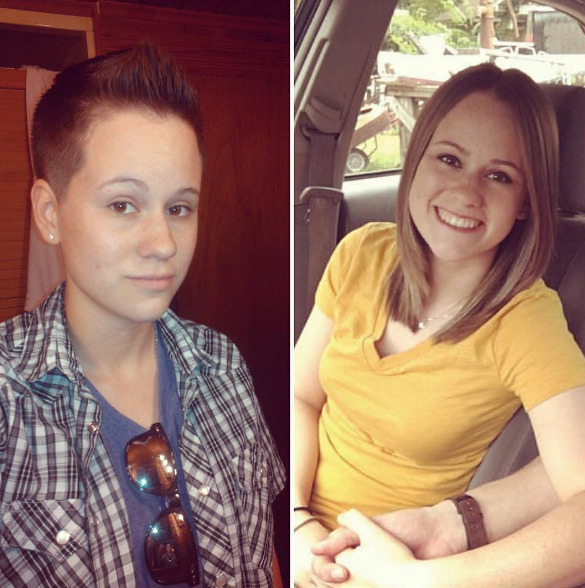 The woman on the left is also Emily… circa perhaps a decade ago.

In a piece for The Gospel Coalition, a website that ought to disturb any decent human being, Emily writes about what she was like back then, with her “hollow eyes and hopeless heart.”

You see, she was a lesbian in high school. You can tell by her short hair and flannel shirt. And that’s clearly not what God wanted for her. She’s all better now, thank you very much, and she hopes she can help other young rebellious girls follow her path to Christ.

Even though damn near everyone could write a reflective piece about how seeing pictures of themselves in high school makes them cringe, what bothers me most about Emily’s piece is her description of how she acted out as a lesbian. As if it’s typical behavior.

By the time I was a young adult, I fully embraced the LGBT label. I cut my hair short, wore boy clothes, and used men’s bathrooms and dressing rooms. I enjoyed the thrill of doing and being what was outside the norm — trying harder drugs, exploring even more taboo sexual acts, and getting a couple of regrettable tattoos.

That’s not “embracing the LGBT label.” (What does that even mean? LGBT refers to four different groups of people.) That’s embracing some ignorant Christian stereotype of what it means to be lesbian. Cutting your hair short and wearing “boy clothes” doesn’t make you any less feminine, nor does it confirm your newfound sexual orientation.

More to the point, why the hell would she be using “men’s bathrooms and dressing rooms” if she were a lesbian? THAT DOESN’T MAKE ANY SENSE! Lesbians are still women. She’s confusing lesbian with transgender, and even then, transgender students would be using the bathroom that’s appropriate for them, not picking the “other” one just to prove some point. That single sentence tells you she was more interested in conforming to someone else’s false notion of what it means to be lesbian than embracing who she really was.

Emily later discovers what Jesus wanted and turns off the lesbian gene, and that’s really the whole point of the piece: To say that, if you’re gay or lesbian, there’s something wrong with you, you can change, and it gets better… if you follow Jesus.

But the article is strong reminder that the basis for this sort of homophobic thinking isn’t belief in what the Bible says. It’s pure ignorance.

In other words, it’s exactly what we’ve come to expect from people who write for The Gospel Coalition.

(Thanks to Elijah for the link)

June 9, 2016
Louisiana May Soon Require Schoolchildren to Say Their Rights Come From a "Creator"
Next Post

June 9, 2016 Pakistani Mother Burns Her Teen Daughter to Death For Going Against Tribal and Religious Customs
"“I agree that a lot of people have heard about Christianity but I'm not as ..."
San_Ban Atheist Sues L’Oreal Over Repeated Acts ..."
"One confuses the people, the other confuses the facts."
Matri D.C. Pastor Charged With $3.5 Million ..."
"A pointy stick?!"
Macallan Even Pat Robertson Can’t Believe a ..."
"Now, I’ve noticed a tendency for this programme to get rather silly"
Macallan Even Pat Robertson Can’t Believe a ..."
Browse Our Archives
What Are Your Thoughts?leave a comment