When Arkansas State Senator Jason Rapert makes an appearance on this site, it’s never for anything good. He has threatened to shoot constituents who ask him questions, fought for a Ten Commandments monument on Capitol grounds, blamed “godless secular humanists” for Target’s trans-inclusive bathroom policies, and bizarrely said those in the majority grant rights to people in the minority (defeating the very idea of “rights”). 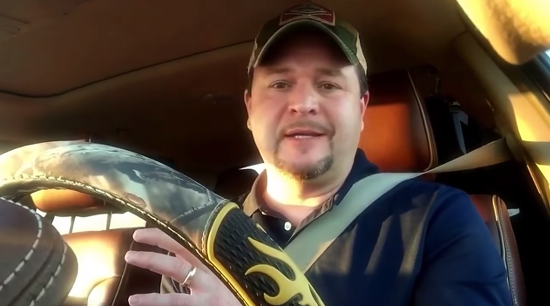 But you have to give him credit for a bill he sponsored and got passed in 2013. While Arkansas law punished drunk drivers who cause fatalities, there was no corresponding punishment for drivers who killed people because they were drowsy, even though driving while sleepy is arguably just as dangerous as being inebriated.

Rapert’s 2013 bill focused on “fatigued driving” and called for drivers to be charged with negligent homicide if they caused a fatal accident after not sleeping for the previous 24 hours. Sure, you might wonder how prosecutors would prove the person hadn’t slept in a full day, and it’s sad that people would not be prosecuted if they’d only been awake for 23 hours, but still, it’s a good start. Give him credit for that. Rapert is a champion of safe driving.

This week, Rapert posted an 18-minute video on Facebook in which he essentially gives a sermon into a dashboard camera while driving. He quickly deleted the video, perhaps grasping the irony that a politician who fought against dangerous drivers is doing something equally dangerous. But not before someone captured the video and re-uploaded it onto YouTube:

Reader Betty, who alerted me to this story, says that she watched the entire thing and did the math:

I guess we should be grateful he didn’t kill anyone while staring at the camera…?

Or should we just wait for Rapert to insert a religious exemption into his own dangerous driving law? Because if you’re speaking into a camera about Jesus when you run someone over, you’re immune from any wrongdoing.

I’ve posted a lot of stories on this site about Christian hypocrisy, but this is a new one even for me.

(Screenshot via YouTube. Thanks to Betty for the link)