Hello, Fellow Masturbators of the Twitterverse

One of the benefits of writing online for several years is that you get cited in various books every now and then.

But I can’t recall ever getting a shout-out like this one, from evolution exhibit “corrector” Megan Fox and her partner-in-oppression Kevin DuJan‘s new book Shut Up! 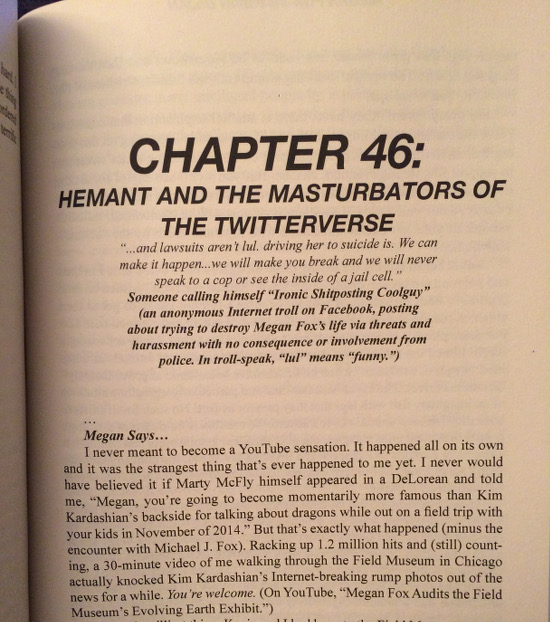 My mother will be so proud…

The 666-page book — I’m not kidding — is full of self-promotional passages like the one on this page. Every Twitter criticism, every scientist who says they don’t know what they’re talking about, every YouTube commenter who mocks them is just proof that they must be on the right track. There’s no possibility in their minds that they’re unpopular because they’re simply wrong. It’s all victimhood, all the time.

That’s not an excuse for the genuinely hateful, threatening comments they received from internet trolls, but the book is just an extension of our podcast interview, with Fox and DuJan constantly pushing this idea that they’re waging some righteous, courageous battle… when the reality is that they’re just wasting everyone’s time.

If they spent more time educating themselves on the First Amendment and science, and less time filing frivolous FOIA requests, “correcting” museum experts who know far more than they do, and writing a giant self-congratulatory book, they’d be doing everyone, including themselves, a huge favor.

June 8, 2016
PA Legislator: Those Who Oppose "In God We Trust" Signs in Schools "Condemn Patriotism"
Next Post