Last month, when Donald Trump held a meeting with evangelical leaders, it emerged that televangelist Frank Amedia was his new “liaison for Christian policy.”

Who’s Amedia? He’s a guy who once claimed to stop a tsunami from coming onto a Hawaiian island. He also blamed AIDS on “unnatural sex.” He also loves to heal people. He supposedly cured a man with cancer in his tongue just by reciting some words on television. (No before/after medical records of the man were ever released, of course.)

And on Monday night, while appearing on preacher Benny Hinn‘s TV show, Amedia took his performance schtick a step further. He spoke in tongues and touched people on their heads to make them fall over, as if God were passing through his body to get to the masses. 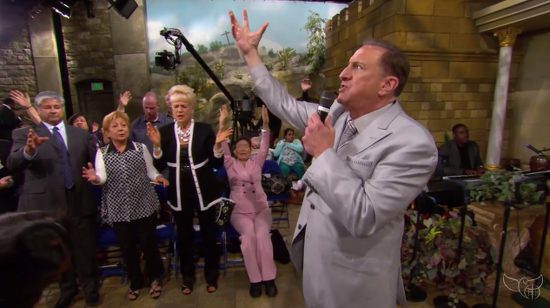 We expect this nonsense — this power of suggestion — on Christian TV shows. But this man could soon be in charge of policy decisions if Donald Trump makes it into the White House.

I can see it now: Let’s get rid of Obamacare and replace it with Amedia just touching the camera during Trump’s State of the Union address. Sure, he’ll ask you to send him money, but you’re perfectly healed through the Power of Christ, right?

We mock Trump’s claim that he’s religious because he doesn’t appear to know much about Christianity. The problem with that, however, is that he’s willing to cede his religious outreach to the kookiest people out there.