Donations of tin foil hats should be most welcome in Dhaka. 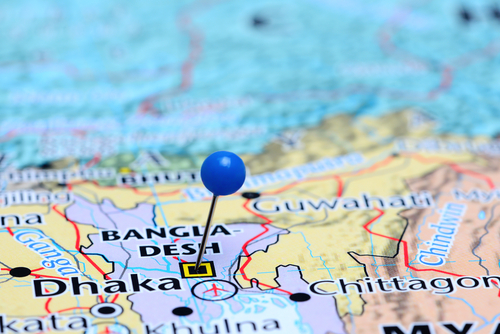 Bangladesh Home Minister Asaduzzaman Khan has suggested an Israeli link to the recent killings of secular bloggers and minorities. He said an opposition politician had met an Israeli intelligence agent and there was evidence of an “international conspiracy” against Bangladesh. … Critics say the government is in denial about the killings, most of which have been blamed on or claimed by Islamists.

“Bangladesh has become the target of an international conspiracy. And a foreign intelligence agency has joined the conspiracy,” Mr Khan said. When asked to elaborate, he said: “You must have noticed that an Israeli intelligence agent had a meeting with a politician, it does not need to be verified further, all Bangladeshi know about it.”

Who are you going to trust: me or your lying eyes?

Khan’s claim is based on the controversial arrest of opposition MP Aslam Chowdhury, who was

… charged with sedition after he was pictured meeting Israeli government adviser Mendi Safadi in India. Mr. Chowdhury described his visit to India as a business trip and has denied meeting an Israeli intelligence agent.

Why would Khan float such a wild, credulity-straining accusation?

Muslim-majority but officially secular Bangladesh has no diplomatic relations with Israel and supports the Palestinians. Any vilification of Israel will certainly please the vast number of Bangladeshis who support the cause of the Palestinians and bring some political dividends for any Bangladeshi party.

The Israeli government wasted no time in calling the charge “utter drivel.”

Since the beginning of last year, more than 40 Bangladeshi citizens, mostly secularists, have been brutally killed in machete and knife attacks by extremist Muslims. Or by, you know, “Israeli agents.” Take your pick.

June 8, 2016
Christian Minister Writes Poem About How Muhammad Ali is Burning in Hell for Not Accepting Jesus
Next Post