Bryan Fischer: If You Have Premarital Sex, Satan Now Controls Part of Your Relationship

If I understand Christianity correctly — and I clearly do — then when you get married, Jesus is always in your bedroom.

At least that was the gist of the argument made by Christian Right leader Bryan Fischer on his show yesterday: 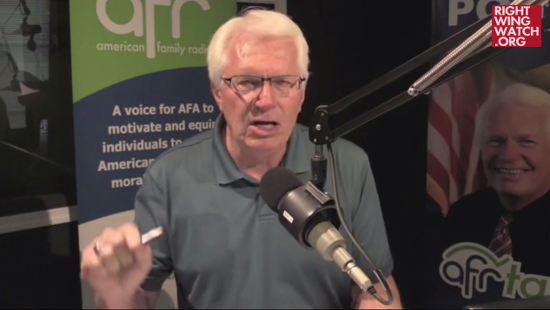 “So one of the things I counsel married couples to do, if they had sex before they got [married],” he stated, “there may be problems they are encountering in their marriage relationship that stem from the fact that they gave ground to Satan before they ever got married and he’s held on to that to that turf and he’s used that turf to work damage to the relationship. So I urge them to go together before God, confess the sin of sexual immorality before marriage, claim His forgiveness, renounce any ground, any claim that Satan has made on the relationship, accept God’s forgiveness and then move on with a fresh start.”

So premarital sex will inevitably lead to postmarital problems, all because of Satan.

Even though sexual compatibility is an important factor in the strength of a marriage, and plenty of people who had premarital sex are doing just fine, and plenty of Christians who waited until their marriage to have sex have gotten divorced.

I’m not surprised that a Christian is using Satan as a scare tactic. It’s downright frightening, however, that some couples trusted Bryan Fischer to be their marriage counselor.

June 7, 2016
A Reminder: People Are Going to Have Different Worldviews. That Doesn't Make Them Assholes.
Next Post

June 7, 2016 No "Ramadan Mubarak" For You, Says Ex-Muslim
Browse Our Archives
What Are Your Thoughts?leave a comment