Let me tell you about my favorite moment from the Reason Rally.

I was sitting backstage in the media area when I noticed someone with a Speaker badge I didn’t recognize. I remember telling the person next to me that she looked like Ariana Grande but I couldn’t place where I had seen her before.

It wasn’t until Penn Jillette introduced her on stage that it came back to me: She was Carolina Peña, a 16-year-old atheist who made international headlines last September when the judges on Ecuador’s Got Talent told her she needed to believe in God if she wanted to win the competition.

The video below is in Spanish (a very rough translation is below), but the look on her face said it all: 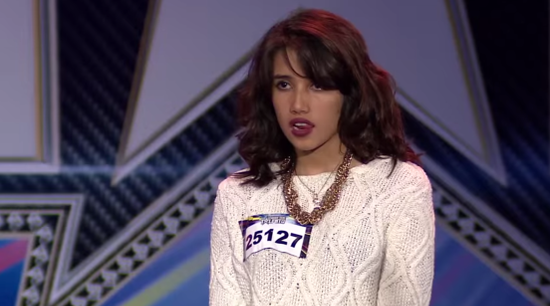 Judge Maria Fernanda Rios: Do you believe in God?

Judge Wendy Vera: Well, you should, honey, so he grants you the miracle [of winning the contest]!

Judge Rios: Without God, we don’t get anywhere. You think being a self-taught singer will make you reach the top, but it won’t. You know why? Because there are things that can’t be seen. That’s where God’s love enters. You can feel God. God can help you. God helps you be better.

Judge Paola Farías: I only want to know why you don’t believe in God. It’s my own curiosity. I’m not judging you.

Peña: It’s because God has not given me a reason to believe.

Judge Farías: So what do you believe? Where did we come from?

Peña: I believe we die and we go back to where we were before we were born.

Judge Farías: And where were we before we were born?

Peña: Before we were born, we were nothing.

Judge Vera: I think that you’re still 16 years old. I believe that you have had a pretty good life so far. But there will come a time when you will suffer and the only thing that will help you get through it is the amazing love of God. It’s something you acquire when you are in a very difficult situation.

The final judge, Fernando Villarroel, told Carolina that he wouldn’t lecture her about faith since, with respect to his colleagues, “religion is one thing and artistic talent is another.”

Despite the faith-based backlash, Carolina obtained the three votes needed to move on to the next round. But she became known as the atheist contestant whose moment in the spotlight was marred by judges who criticized her lack of faith instead of praising her voice. (At least one of those judges was later fired from the show, in part because of her contentious exchange with Carolina.)

That’s the backdrop for why Penn invited her on stage to sing with him.

They ended up performing for a crowd of several thousand people — singing a song dedicated to the late Christopher Hitchens — and this time, no one reprimanded Carolina because of her atheism:

What a beautiful moment.

I don’t know where else but the Reason Rally that story, and that outpouring of love from the crowd, could have happened.

(via James Kirk Wall. Portions of this article were published earlier.)

June 7, 2016
Texas County with Crosses on Police Cars Will Pay Atheist Group More Than $22,000 in Settlement
Next Post