A Reminder: People Are Going to Have Different Worldviews. That Doesn’t Make Them Assholes. June 7, 2016 Terry Firma

A Reminder: People Are Going to Have Different Worldviews. That Doesn’t Make Them Assholes.

Let’s say there’s a large Christian rally on the Mall in Washington, D.C., and a few hundred atheists show up with hats and signs. Their signs contain pictures of Charles Darwin and Christopher Hitchens, alongside pithy quotes. The hats are embroidered with fish-with-legs symbols, and some contain the slogan Reason Rules. The atheists do nothing worse than stand there, except for one guy who yells pro-LGBT messages through a bullhorn. He gets a few raised eyebrows, but everyone is peaceful, and while there are some glares and an occasional spirited conversation between atheists and Christians, no one truly gets in anyone else’s face. 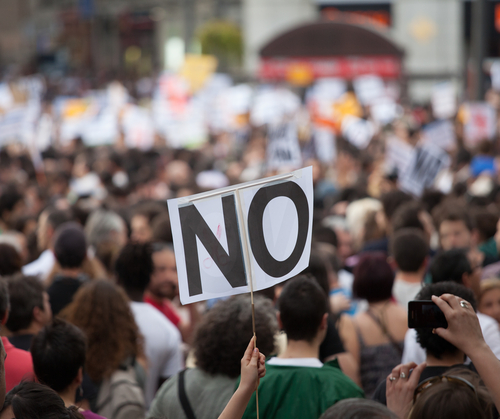 The next day, however, an annoyed Christian blogger puts pictures of the atheists online under the label “ASSHOLES,” and he writes:

Yes, I call them Assholes. The first second I saw ’em when I got there Saturday morning, I thought “Yeah, you assholes just COULDN’T stay home and let us have our event. You HAD TO be here, didn’t you, trying to spoil it.”

Would you say that’s fair?

Whatever your answer, you’d have to apply the same verdict to atheist blogger Hank Fox, who published pictures of a handful of Christians at last Saturday’s Reason Rally, and accuses them of being spoilers. And, well, assholes.

I shouldn’t need to point out that the Christians had every right to be there — just as small groups of atheists may make their presence known at public Christian events. (An organized counter-demonstration usually requires a permit, but that’s not what we’re talking about here.)

I’m always amazed by the people on either side who hate others just for existing, for showing up, for voicing a contrary opinion. In their world, wearing a hat that says “Jesus Is My Boss” or “Good Without God” is an intolerable provocation, and enough reason to publicly call them names.

Some people’s idea of free speech is that they are free to say what they like, but if anyone says anything back, that is an outrage.

That’s clearly as true today as it ever was.

UPDATE, 5:30 EST: Without acknowledgement or explanation, Hank Fox — or somebody — has replaced the photos of Christians at the Reason Rally with photos of atheists. The text is the same, making for an extra-confusing post. No idea what this all means. I’ve sent him a message and will update again if if I hear back.

UPDATE 2, midnight EST: The photos have been changed back to the original “assholes.” Says Fox,

“I think this [happened] because I named the photos 1, 2, 3, etc., in two different collections. Apparently the system can’t differentiate. Argh.”

June 7, 2016
It's This Drowning Dog's Lucky Day When a Sikh Samaritan Disobeys His Religion
Next Post

June 7, 2016 Bryan Fischer: If You Have Premarital Sex, Satan Now Controls Part of Your Relationship
Browse Our Archives
What Are Your Thoughts?leave a comment