According to Christian hate group leader Tony Perkins, it’s disgusting that President Obama points to the Bible to justify his compassion for LGBT people, especially since we know damn well the Bible tells us to discriminate against them. 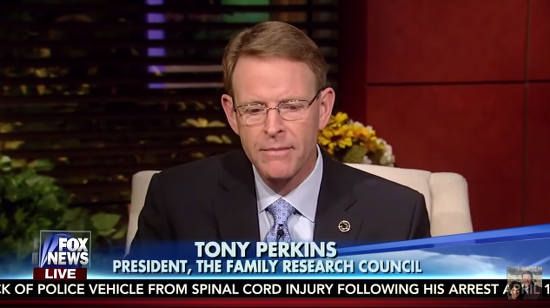 In his “Washington Update” column for the Family Research Council, Perkins writes:

The Bible is not an á là carte buffet, where you can pick and choose which parts you like. Tell that to President Obama, who seems quite fond of quoting Scripture when it suits his personal agenda. Of course, most of the time that means twisting the verses’ meaning or taking them out of context altogether to justify positions that are in complete contradiction to Christian teaching — like same-sex marriage.

Using the Bible to suit your personal agenda…? WHO WOULD EVER DO SUCH A THING?!

This week, the president is back at it, using his Bible of convenience to justify his outrageous decree on public school bathrooms and showers. To the disgust of most Christians, Obama insisted that “my reading of Scripture tells me that [the] Golden Rule is pretty high up there in terms of my Christian belief.” Let me make a suggestion to the president: before quoting the Good Book, he should try reading what it actually says.

That has to be the greatest thing a Christian bigot has ever said: That man said we should treat people with kindness?! If he read the Bible, he would know Jesus wants us to do the opposite!

Actually, Obama’s on to something. Check out Matthew 7:12:

So in everything, do to others what you would have them do to you, for this sums up the Law and the Prophets.

I guess by “everything,” Jesus really meant, “lol, just kidding, not when I’m talking about the gays.”

Glad we have Tony Perkins to help us read between the lines.

Obama can’t win with these people. If he says he’s Christian, many assume he’s secretly Muslim. If he doesn’t quote the Bible, he’s a lousy Christian. And when he quotes the Bible, they say he’s doing it wrong.

June 6, 2016
Christian Pastor: "The Only Atheists in the World Live in America and Europe"
Next Post

June 6, 2016 Analyzing the "Bunker Videos" from This Year's Jehovah's Witnesses Regional Conferences
Browse Our Archives
What Are Your Thoughts?leave a comment