In 2011, the last time Australia conducted its census, this is the way researchers asked people about their religion: 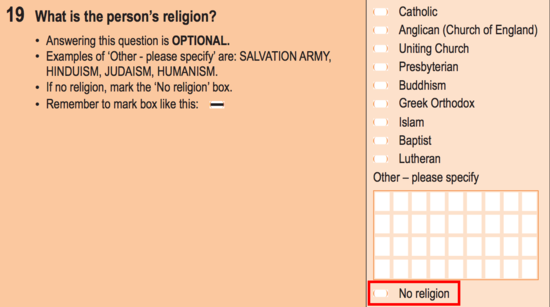 “No religion” was waaaaay at the bottom of the list, under the giant “Other” section, where it’s possible many people didn’t even see it.

In the last census taken in 2011, 5.4 million people picked the “Catholic” box and a total of 13.1 million Australians (61.1 per cent) said their religion was some type of Christianity. Meanwhile 4.7 million (22.2 per cent) Australians picked “no religion”, or wrote down agnosticism, atheism, humanism or rationalism.

As the Australian Bureau of Statistics prepares for the upcoming 2016 census taking place this August, they’ve changed the way the answer choices appear. Here’s what the religion question will look like this time around: 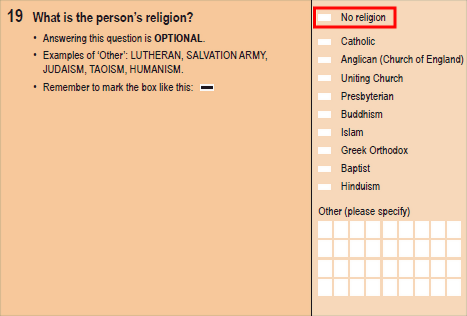 “No religion” is right at the top, where no one can miss it.

Because of that, you have to believe more people will check the box than before, and not just because the demographics are already shifting in that direction. If you’re culturally Catholic but don’t really believe in the doctrine, you may have checked off Catholic in the past because it was simply the first option brought up. However, if “No religion” is the first thing you see, you may be more inclined to be honest about your beliefs.

Hell, even the people who don’t give a shit about the question may just check the top box by default. (Politicians are well aware of the importance of those apathetic whoever’s-on-top-of-the-ballot voters.)

This slight change could have huge implications:

If Christianity did lose its position as the majority religion, this could impact government spending programs such as the school chaplaincy program, according to those advocating for the change.

“Many government services and resources depend on census accuracy, and the figures are used by religious organisations to maintain their status and influence in terms of grants, tax-free services, access to schools for religious instruction, and for their generally privileged position within the community,” president of the Rationalist Society of Australia, Meredith Doig, said this week.

And placing the ‘no religion’ box at the top of the list could swing the results significantly, according to associate professor Roger Wilkins at the University of Melbourne, who produces the annual Household, Income, and Labour Dynamics in Australia (HILDA) survey).

“People are looking for the first option that they think they can fit into… those sorts of people who are not strongly committed one way or the other are particularly prone to being influenced by the order of responses,” he told Fairfax Media.

This is a change that’s been suggested for years, and we’ll find out in mid-2017, when these results are made public, how big of a difference it will make.

The best part about a recent article on the change is how Atheist Foundation of Australia President Kylie Sturgess dismisses any criticism of the change:

She sees no reasons religions such as Catholicism (currently number one) should be concerned by the change.

“Why would they be upset by people being encouraged to be truthful?” Ms Sturgess said.

“After all they’re after honesty and I’m sure they want honest Catholics ticking the Catholic box in the same way we say, if you don’t find yourself that way, tick something else.”

I love it. If any religious group complains about their placement on the census, they’re essentially telling people to lie about their religious affiliation. Atheists, on the other hand, can simply remind people to be honest — if you’re not really religious, stop faking it. Just say you’re not. And you can bet there will be many advertising campaigns encouraging that kind of honesty over the next couple of months.

(Thanks to Peter for the link. Large portions of this article were published earlier)

June 6, 2016
Fox News Priest Trashes Reason Rally Because Some Atheists Want You to Stop Believing in God
Next Post

June 6, 2016 I Laughed About a Dead-Baby Story. Am I Irredeemable?
"You don't normally hear of autopsy reports that read like bingo cards."
Dmar3 These People Didn’t Leave Their Churches; ..."
"I saw.. a lot of text. I saw stuff about denying the big bang. Determinism. ..."
Makoto A GOP Lawmaker’s “Earthen Vessel” Rant is ..."
"Remember how pink hair lady keeps talking about cows driving tractors in heaven and cities ..."
Makoto Evangelist: Genetic Testing Companies Like Vaccines ..."
"You know, I tried reading a few of his, but they never hooked me in ..."
Makoto Richard Dawkins Urges People to Sign ..."
Browse Our Archives
What Are Your Thoughts?leave a comment