Where Was the Crowd for the Reason Rally? June 5, 2016 Hemant Mehta

Where Was the Crowd for the Reason Rally?

For the people who attended Saturday’s Reason Rally, it was a wonderful event (at least from my perspective). It was a chance to meet other atheists, hear inspiring speeches, and feel like part of the majority… if just for a few hours. At the very least, it was a chance to surround yourself with many other like-minded people — something most American atheists never get a chance to do back home.

But one of the storylines coming out of the event is that, compared to the estimated 30,000 people who showed up in 2012, this Rally brought together far fewer people. 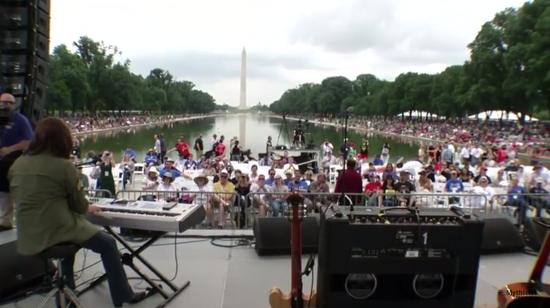 That wasn’t supposed to happen. After all, our community has grown over the past four years, there was no rain this time around, and there were big-name celebrities on the speaking roster (though some of the most famous people on the list, including Johnny Depp, Margaret Cho, and Richard Dawkins, couldn’t ultimately participate for a variety of reasons).

No official crowd estimates have been released. But even in the early afternoon, when the crowd was likely at its peak, nothing I saw suggested “15,000 to 20,000” in attendance, as the organizers told Religion News Service. I’d put the range at about half of that, but we’ll see.

Did something go wrong?

Let me say up front that I don’t think this is *that* big of an issue. If the people who showed up had a good time and left the event energized and committed to activism back home, that’s a better gauge of success than some arbitrary attendance figure. But a low turnout still takes a lot of the air out of what was an otherwise great event.

So let’s talk about what may have contributed to that.

1) People didn’t know about the event.

Frankly, if you’re not already active in the atheist community — if you don’t read websites like this one, or watch atheists on YouTube, or belong to some atheist group affiliated with a national organization, etc. — you may not have even known this event was taking place. There was relatively little pre-Rally buzz in the media this year, at least compared to four years ago. And there’s obviously no good way to reach out to people who are, almost by default, not interested in being part of a community.

2) The atheist “base” wasn’t particularly excited about the event.

Organizers made clear from the beginning that they wanted to appeal to a broader segment of the non-religious demographic. By inviting speakers who promote critical thinking in general, instead of ones who mostly focus on the problems with religion (like last time around), they hoped to draw even more people to the Rally. That may have backfired.

That’s not a criticism of the speakers. I’m just saying that if you want to draw committed atheist activists to the Rally, it helps to have speakers known for their commitment to atheist activism.

Many of the invited speakers (including those who couldn’t/didn’t make it) would never show up on anyone’s list of influential atheists. And of the people who might appear on that list, I suspect many of those people weren’t speaking at the Rally. (Whether or not they were invited is another question.)

To put it another way, who would draw more people to an atheist rally: Johnny Depp or Richard Dawkins? And if the answer is Dawkins, why lavish so much attention on random celebrities? Why not spend that money instead on atheists who already have followings?

3) Large segments of atheist activists were not represented onstage.

For the people who identify as atheists — the ones who take the label seriously — how are they connected to our community? How do they “feed their atheism itch” on a regular basis?

A lot of them read blogs. But there weren’t any atheist bloggers onstage.

A lot of them watch YouTube. But there weren’t any atheist YouTubers onstage.

A lot of them listen to podcasts. But there weren’t any podcasters onstage.

A lot of them read books. But there were very few popular authors (who write specifically about atheism) onstage.

A lot of them listen to atheist comedians. But the most famous ones sent video messages instead of appearing in person.

(I realize much of this sounds very self-serving, so let me say very clearly that this isn’t about me. There are several people I would recommend in each of those categories — people with their own large, distinct followings — who could have encouraged their fans to come to the Rally.)

Where were the up-and-coming ex-Muslim leaders? Where were the ex-Mormons? Ex-pastors? Young activists? Lawsuit plaintiffs? Victims of religious abuse?

All that said, there’s no lineup that would’ve satisfied everybody. The organizers weren’t going to win this game no matter what they did. But a more diverse cross-section of atheists, especially ones with built-in fan bases, could have brought in a larger crowd.

4) The event took place in the summer.

This was partly out of the organizers’ control because when it comes to reserving space in Washington, D.C., you don’t get to pick whatever date you want. But the 2012 Reason Rally took place in late March. School was still in session. Students could organize trips much more effectively. That’s so much harder to do over the summer, when many students go back home and are separated from their activist friends, and when many families are planning their own vacations.

5) The novelty wore off.

I suspect many of the people who came to the Rally in 2012 simply saw no reason to return this year. They had done it already so it wasn’t as exciting. They didn’t feel a need to cancel their plans and book a flight for a “once in a lifetime” opportunity that was happening for the second time in four years.

6) There was no sense of urgency.

In 2012, marriage equality was still not a reality, and the Religious Right was still a powerful force in politics. While religious groups still have plenty of power, we’re currently in the midst of an election where Donald Trump, Hillary Clinton, and Bernie Sanders really don’t talk ad nauseum about their faith. They all claim to be religious, but I’m not worried about any of them making decisions based on the voices in their heads.

(Question: If Ted Cruz had won the Republican nomination, would the Reason Rally crowd have been larger? My guess is yes.)

It’s hard to get people worked up about an atheist rally (that’s what I’m calling it, anyway) when there’s no immediate, obvious, major religious threat trying to get into the White House. Obviously, there are still issues impacted by religion, like abortion access and bathroom bills, but nothing stirs the base like a presidential race where everyone thinks their rights will be in jeopardy if the wrong person gets elected.

There are some smaller issues that also had an impact on publicity and attendance, like a major change in who was organizing the Rally that occurred just as the planning was hitting its stride, and chartered buses that didn’t have enough seats reserved and had to be canceled at the last second. Also, when looking at pictures of the crowd, keep in mind that in 2012, we were much more condensed. This year, we had more space to spread out — and the giant Reflecting Pool dividing the crowd in half — which made the audience seem even smaller depending on which picture you were looking at.

The point is: there are lots of reasons this year’s crowd was smaller than the one in 2012. Some of them could have been prevented. Some of them were out of everyone’s control. (And despite what some are saying online, I don’t believe that an overzealous commitment to “social justice” is to blame for any of this. That’s a red herring.)

Let’s also not forget how easy it is to play Monday morning quarterback after an event like this. We can all criticize these things; very few of us are willing to take on the responsibilities of planning and executing a Rally of this magnitude.

The only reason I’m writing this is because I’d like to see another Rally in the future, and I’d like it to be bigger and better than the ones we’ve had so far. I’m sure the organizers will do their own internal post-mortem in the coming weeks and I hope they consider some of these issues as they make recommendations for the future. Who knows — maybe they already discussed many of the things I mentioned in this post and had their reasons for taking another path.

I’ll say it again: Attendance wasn’t the most important aspect of the event. It’s something to think about, sure, but I would measure success by how many people were inspired to be even more active and vocal about their atheism and commitment to church/state separation. Unfortunately, that’s virtually impossible to measure. So expect the arguments about low attendance, and what’s to blame for it, to continue for the next several weeks.

June 5, 2016
Religion Might Make You Feel Better, But That Doesn't Mean You Should Keep the Faith
Next Post