Chad Vegas won’t be running for re-election to the Kern High School District board of trustees (in Bakersfield, California) because he can’t bring himself to show any respect for transgender students. 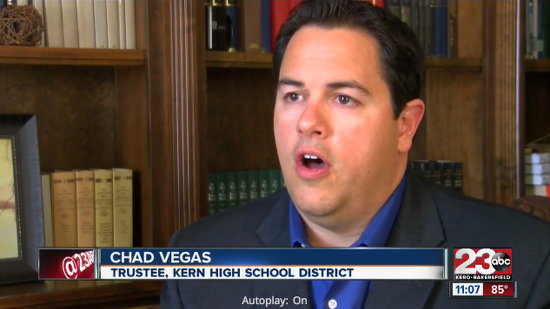 Vegas made the decision [not to run] after voting against policies Thursday that mandate non-discrimination against transgender individuals at KHSD, including requiring staff and teachers to refer to transgender students by the pronoun with which they identify.

Those board policies, which came as recommendations from the California School Boards Association, are an assault on the First Amendment, Vegas said.

“I can’t personally oversee the implementation of those kinds of laws and policies,” Vegas told The Californian Friday. “They violate my religious conscience.”

Who knew treating people with dignity violated the religious beliefs of the lead pastor at Sovereign Grace Church of Bakersfield?

In a message posted on Facebook, Vegas explained to his church why this was a decision he had to make:

Today, I sat in a meeting as our board voted to bring into our district policy the full spectrum of the LGBTQ agenda. I realized as I listened to the numerous legal justifications and requirements that board members uphold these deeply offensive and immoral laws that I can no longer serve in this role. I am a Christian pastor above all else. I could not vote for these policies. I can not remain on a board to enforce these policies. I spoke out against the board voting for this. I called on them to realize that they will answer to God on this vote, and they should fear Him more than the state. I did not prevail.

I plan to address further my own personal realization that government education has been hijacked as a cause for the indoctrination of your children in nihilism, hedonism, and atheism…

All because transgender students want to be treated like everyone else, and Vegas insists on letting them know there’s something wrong with who they are.

Let me be the first to applaud his decision. A pastor who says his religion prevents him from treating all students with respect has no business sitting on a school board, and Vegas will now be able to dedicate himself full-time to further bigotizing his church.

What’s amazing is that the other board members are trying to convince him to change his mind:

Board President Mike Williams decried the decision on social media. He begged for somebody to “talk him out of it,” then revised his post to say, “No, pray him out of it.”

Board member Bryan Batey, who has served the board on-and-off for more than two decades, said the district is “losing a great leader.”

Great leaders on a school board put their students first. Vegas admits he’s incapable of doing that, so good riddance. His brand of Christian assholery won’t be missed.

Maybe now, someone with a kinder heart and more respectful attitude can take his place.

(Screenshot via 23ABC. Thanks to Brian for the link)