The verdict is in: Same-sex parents raise happy, healthy kids.

It’s backed by study after study, and the legalization of marriage equality will only make it more widely known that there is virtually no difference in the general wellbeing of kids with same-sex parents versus different-sex parents. The debate is over.

But that news hasn’t reached Rep. Trent Franks, a Republican lawmaker from Arizona. 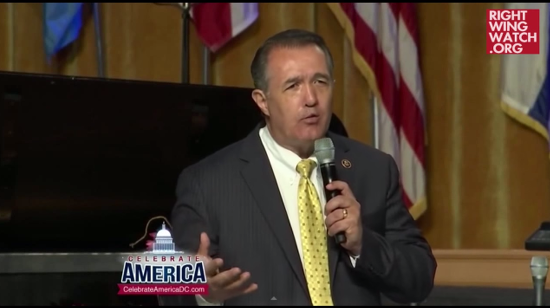 Franks recently appeared on “Washington Watch,” a radio program run by the Family Research Council, a certified hate group. There, he chatted with the FRC’s Tony Perkins and proved that he doesn’t actually read the news; in a rant about LGBT rights and marriage equality, Franks claimed that “all of the research shows” kids of same-sex parents are worse off than kids with a mom and dad.

From the interview, nabbed by Right Wing Watch:

“In times past, there were two foundations of discussion that we had on traditional marriage. One was that certain people felt like this was a religious conviction on their part, that they opposed same-sex marriage. And then there were those who said, We believe that children belong in a permanent family where they have a mother and a father because all of the research — apart from religious conviction — shows that they do better on every measurable metric when they have a mother and a father.

“It just changes their entire childhood in a way that gives them the best possible chance in life. I think we can argue on both of those planes, but in public policy, the strongest one is what is best for the children. There is no doubt whatsoever that whether it’s caused by divorce or lack of marriage or same-sex marriage, whatever it is, whenever a child is not in a mother-father family, a traditional family, they have some odds stacked against them in many areas.”

Franks might be thinking of the infamous Mark Regnerus study, a horrifically flawed piece of “research” that claimed same-sex parenting harms kids. In reality, the Regnerus study has been debunked, condemned, and generally torn apart for its shoddy research methods. One of its most obvious shortcomings was that almost none of the kids in the study had actually been raised by two same-sex parents for their entire lives:

In fact, same-sex parents have been raising kids for decades, and doing a damn good job at it. The more research shows this, the more conservatives get terrified of a new normal they just don’t understand. In an interview with Slate, Nathaniel Frank said the same thing:

Scholarship on LGB parenting began in the 1970s, when primarily lesbian scholars began to fill research gaps to address questions about lesbian parenting. … They began to build a scholarly record aimed at helping gay people — and policymakers — to grasp the best ways to understand and support children living in families with lesbian mothers.

But as the culture wars increasingly focused on gay people, these scholars also found themselves on the defensive about their rights to maintain custody or build new families with children, and so a tremendous amount of energy was devoted to showing that “the kids are all right.” This was enormously important research and has been extremely helpful in convincing the nation that same-sex parenting and marriage was not, contrary to claims by the religious right, a threat to children.

Despite his unapologetically hateful claims, Rep. Franks still wants you to believe that liberals are the intolerant ones and that he’s a good guy. Also from the interview:

The so-called tolerant left are the most intolerant people that I know of. And they don’t realize that true tolerance is not so much that you have disagreement with each other, but that you can still be kind and decent and respectful towards each other in spite of those differences. That’s something I’ve always tried to to do, I’ve always tried to be respectful in spite of differences that I have with someone.

Looks like Rep. Franks was wrong about a couple of things in this interview: “all of the research,” and his self-assessment of his own kindness, decency and respectfulness. Yikes.

June 4, 2016
37 Years After Its Release, Monty Python's Life Of Brian Provokes a Constitutional Case in Germany
Next Post