A week ago, a music, dance, and cosplay event in Bangkok featured projected slides that lampooned the controversial Buddhist sect Dhammakaya. The slides exuded humor that would be considered tame by U.S. standards — “photoshopped images of its UFO-shaped headquarters,” for one, and also “the temple’s infamous abbot Dhammachayo in [a] fabulous costume.”

Some party revelers also cosplayed as Dhammakaya monks and danced in front of the screen.

Followers of Dhammakaya were outraged, claiming that the party antics were “blasphemous against Buddhism as a whole.” The sect is suing the party organizers (an outfit named Trasher), and hopes that other national Buddhist groups will join its lawsuit. 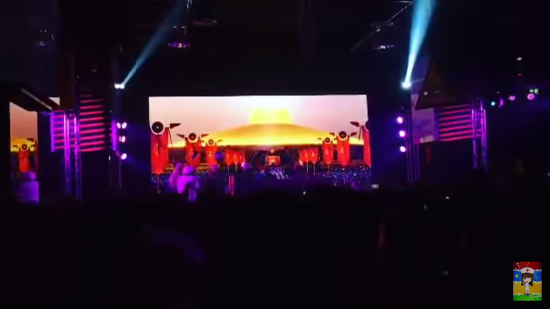 … even as [Dhammakaya’s] headquarters were under siege by law enforcement officers, and its leader wanted on embezzlement charges.

More on that in a minute.

Unfortunately, rather than tell the sect to go do something anatomically challenging to itself, Trasher said it was sorry.

“We apologize for showing the photoshopped images, and we apologize on behalf of party attendants who dressed up in a mocking way,” it said. “The incident that happened may lead to court proceedings. Therefore, at this moment, we cannot explain or say much about it, other than apologizing for what happened.”

According to a Bangkok news site,

Dhammakaya is often ridiculed on social media for its extravagant pageantry and teachings that place emphasis on donations. The sect, which has strong support among the moneyed elite, is also considered heretical by many mainstream Buddhists.

To protect its name, Dhammakaya occasionally goes on the offensive, using a carrot-and-stick approach of both making ad buys and threatening lawsuits. But in recent months Dhammakaya found itself the target of legal threats, with the Department of Special Investigation accusing its 72-year-old leader Dhammachayo of receiving millions of baht in embezzled funds.

After Dhammachayo refused to surrender to police per his arrest warrant Thursday, law enforcement officers have surrounded the Dhammakaya complex in northern Bangkok in an effort to arrest the charismatic abbot. … Dhammakaya staff put up barricades and barbed wire around the complex, presumably as a defensive measure.

Allegations of financial misconduct have swirled around the Dhammakaya wat since 1999. Police say they have enough evidence to have Dhammachayo prosecuted for

… money laundering and receiving ill-gotten wealth in connection with a bankrupt savings cooperative.

However, for months now, the abbot has claimed to be too sick to submit to questioning, going as far as to submit a doctor’s statement that is now believed to constitute more evidence of deceit.

Thai law enforcement authorities are reportedly ready to commit a force of 2,200 officers to dislodge the abbot from his fortified temple.

The scenario reminds me of the 2014 siege involving Indian God-man Sant Rampal, who holed himself up in his ashram to avoid accountability for murder and other charges. Around 15,000 followers were in the compound with him, some involuntarily; Rampal used them as human shields. Six people died when Indian cops forcibly extracted the sect leader.

Thai police are standing down so far to prevent a similar bloodbath.

It seems bizarre that a sect that’s facing violent government action and the removal of its leader bothers to sue some club kids for blasphemy. But then, this is religion — I guess it’s supposed to be bizarre.